There is no other way of describing these storms. When we see the devastation the beaches that the coastline of Marbella has have suffered, other words don’t make the cut. There has also been a serious collapse of dune mass along the Marbella Dunes-Ecological Reserve.

Our question is: how long are the various Administrative bodies going to take before they get going on work to alleviate this atrocious loss? Our beaches and our dune ecosystem attract the national and foreign tourism that is the mainstay of the economy of Marbella and the Costa del Sol.

Nobody can now pretend that these storms had never happened before or that they were unexpected. These latest Easterlies produced, as always, enormous waves that hit the Costa del Sol coast. Doing nothing is not a solution – it can only be described as management failure. It is time to listen to the sensible proposals that have been worked on by many organisations in collaboration with our Andalucían universities.

For the past 6 years we have been trying to get the support of the various Administrative bodies to launch the technical and environmental study that must legally be carried out before multifunction artificial reefs can be installed off our coast.

Last year we proposed getting started with a Pilot Project to show how the storm damage can be mitigated. The storms are not going to stop. Climate change will see to that .This proposal was put to the various Institutions that make up the group against Climate Change: “Coastline Protection Strategies between Cádiz – Málaga (Marbella) – Almería”.

As a starting point for this Pilot Project, we proposed the Natural Monument “Dunas de Artola” area in Cabopino. Our Environmental Association did not get a reply, not even a phone call to show that there is any interest in finding solutions.

NO DUNES, NO BEACHES – how true this slogan is! When the dunes disappear as a result of wave damage, there will be no beaches left, neither wet nor dry. The sand will be swallowed by the sea, thus raising the level of sea floor and the sea will reach the urbanizations that currently are defended by natural dykes – the dune formations!

Is this the scenario that our decision takers want for the population of the Costa del Sol? Wealth derived from tourism is elusive, fickle. Without it, what is left in Marbella for its valuable and much appreciated citizens? 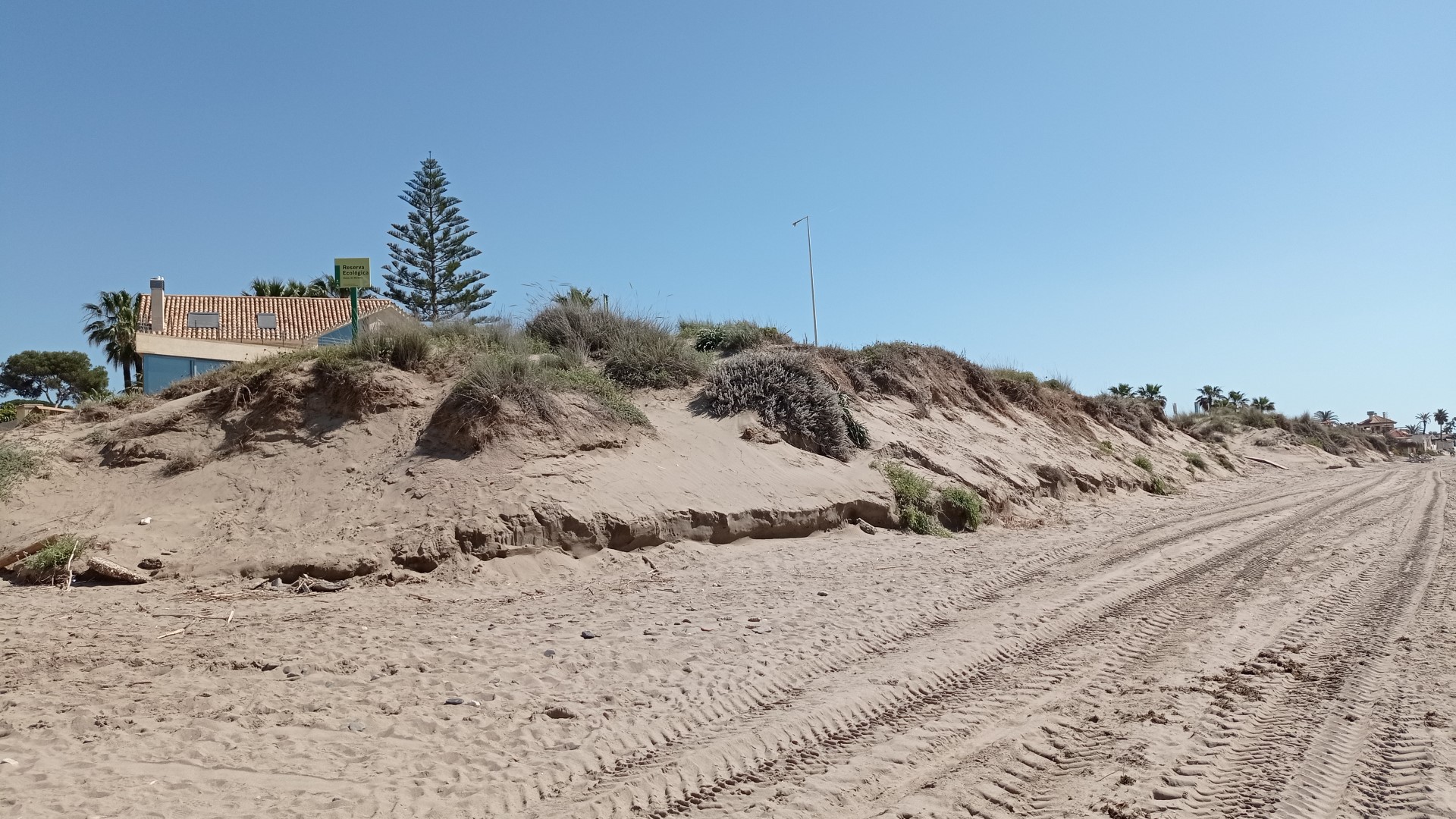 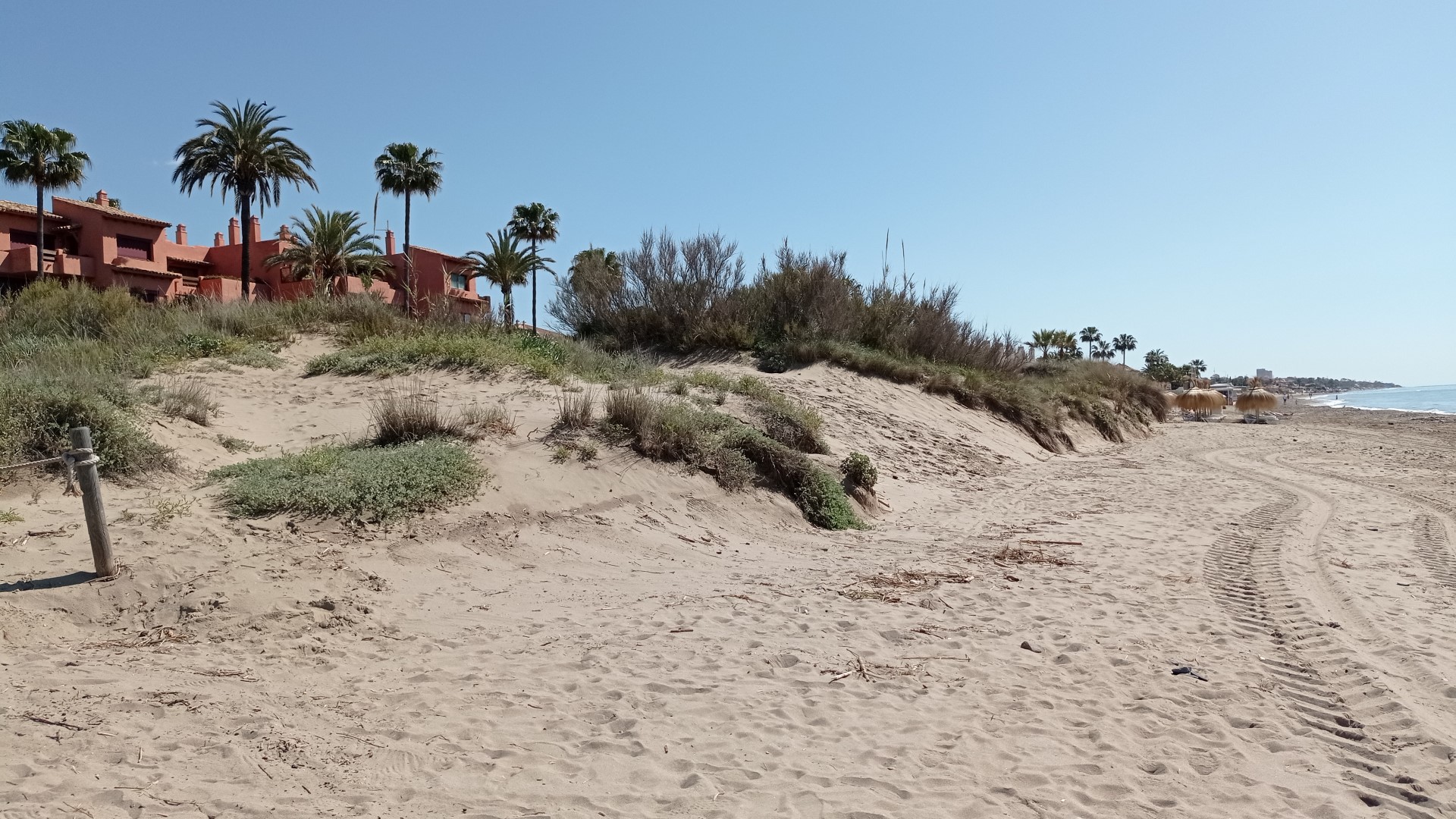 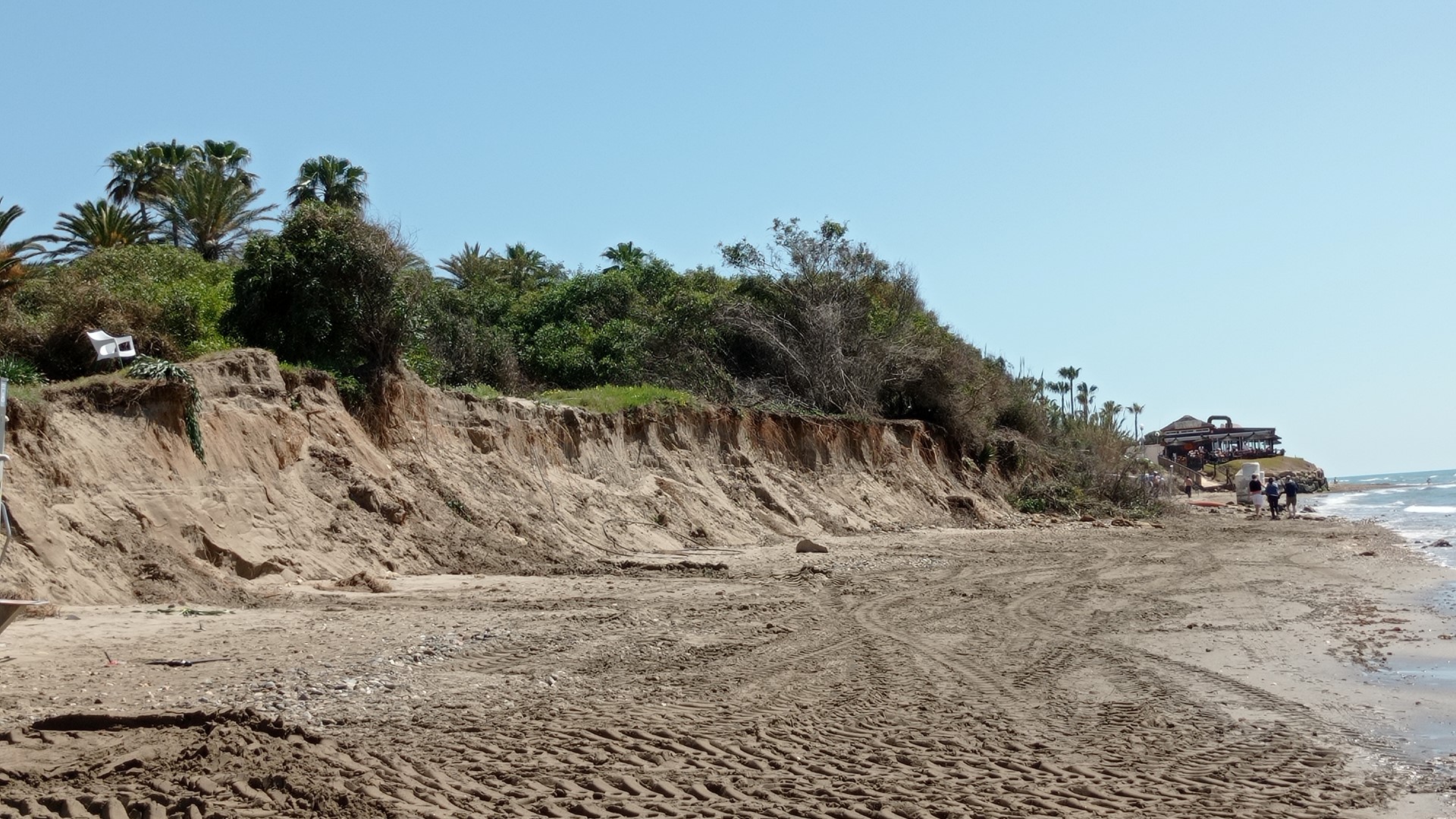 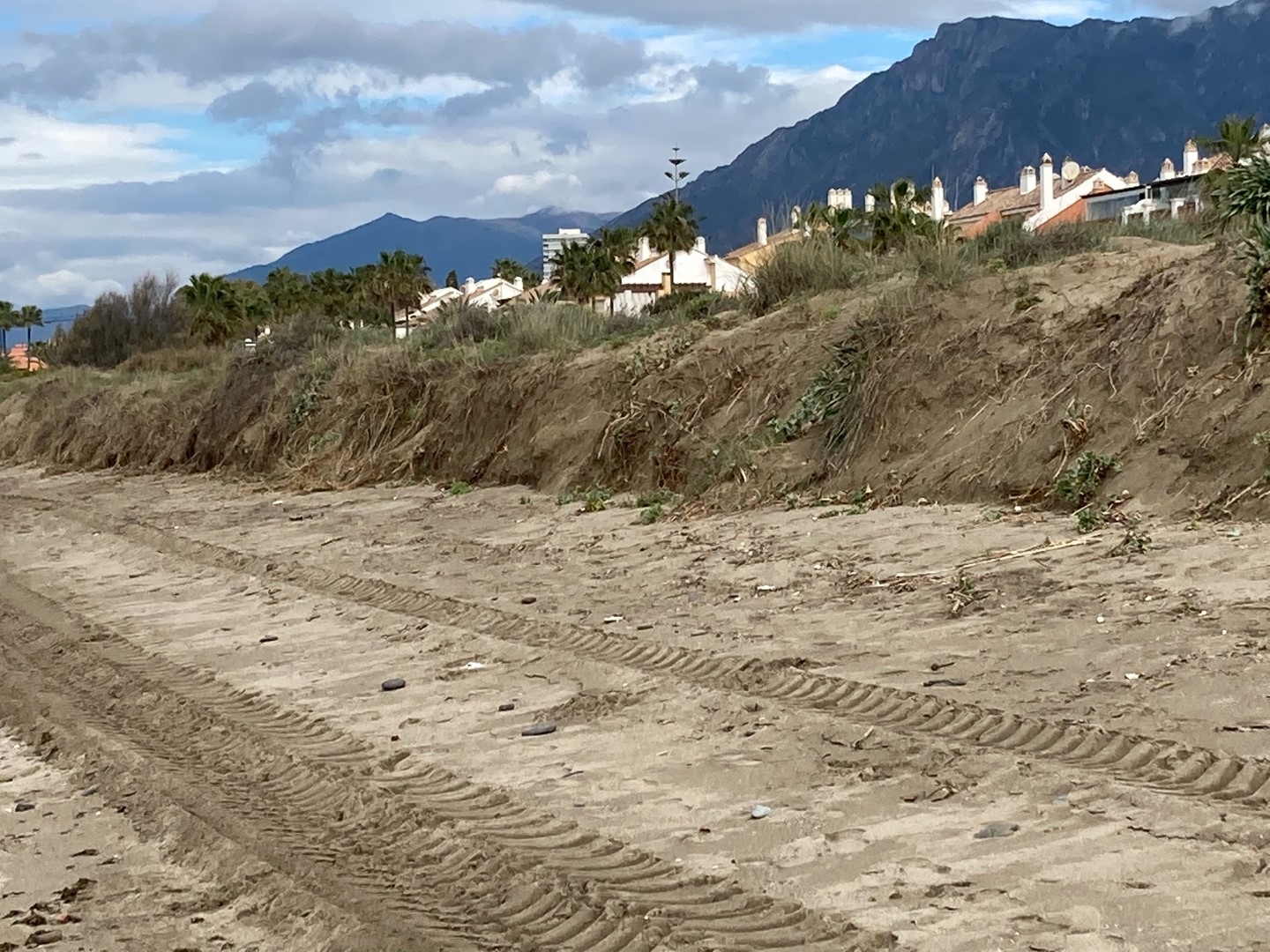 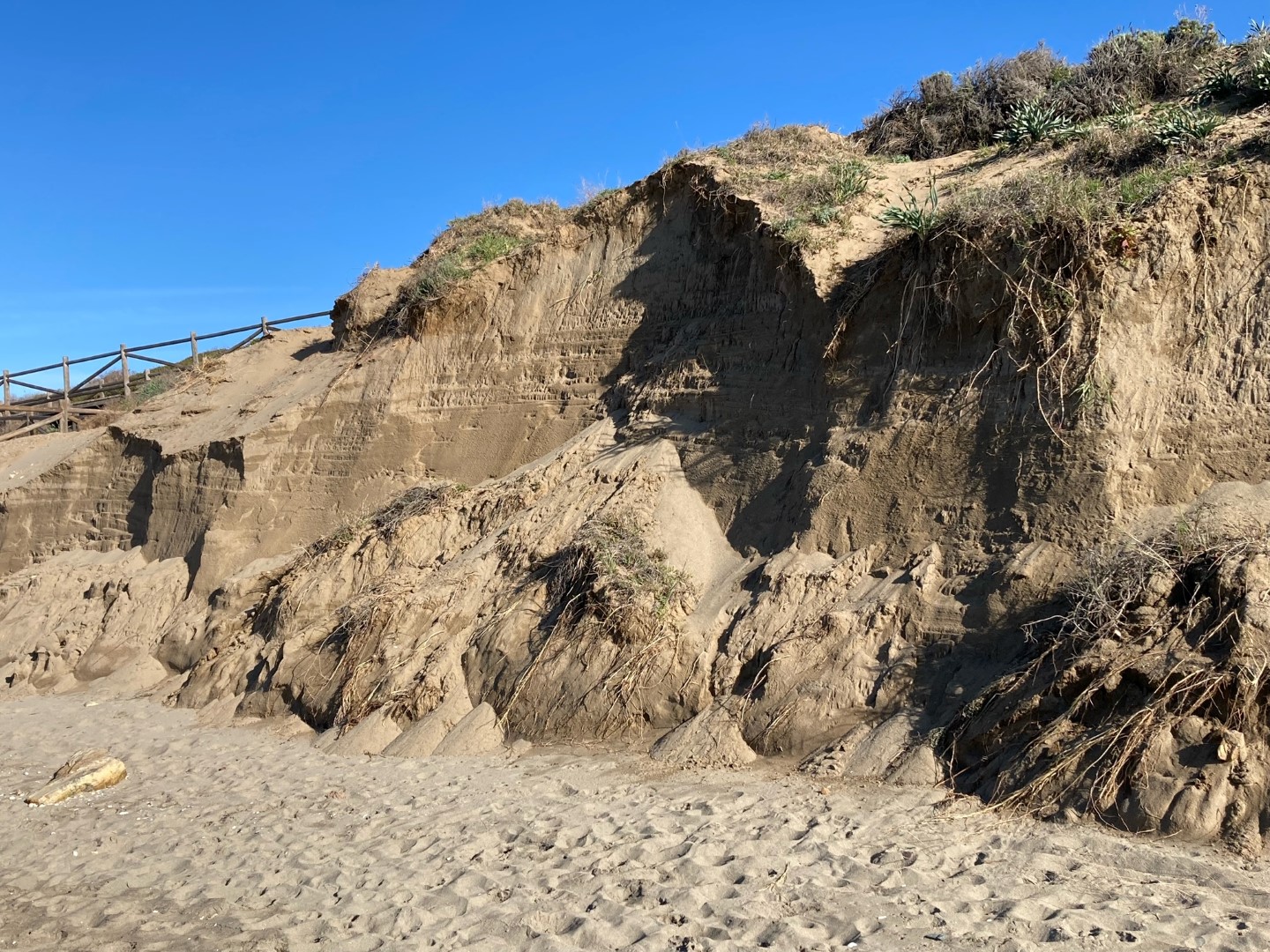 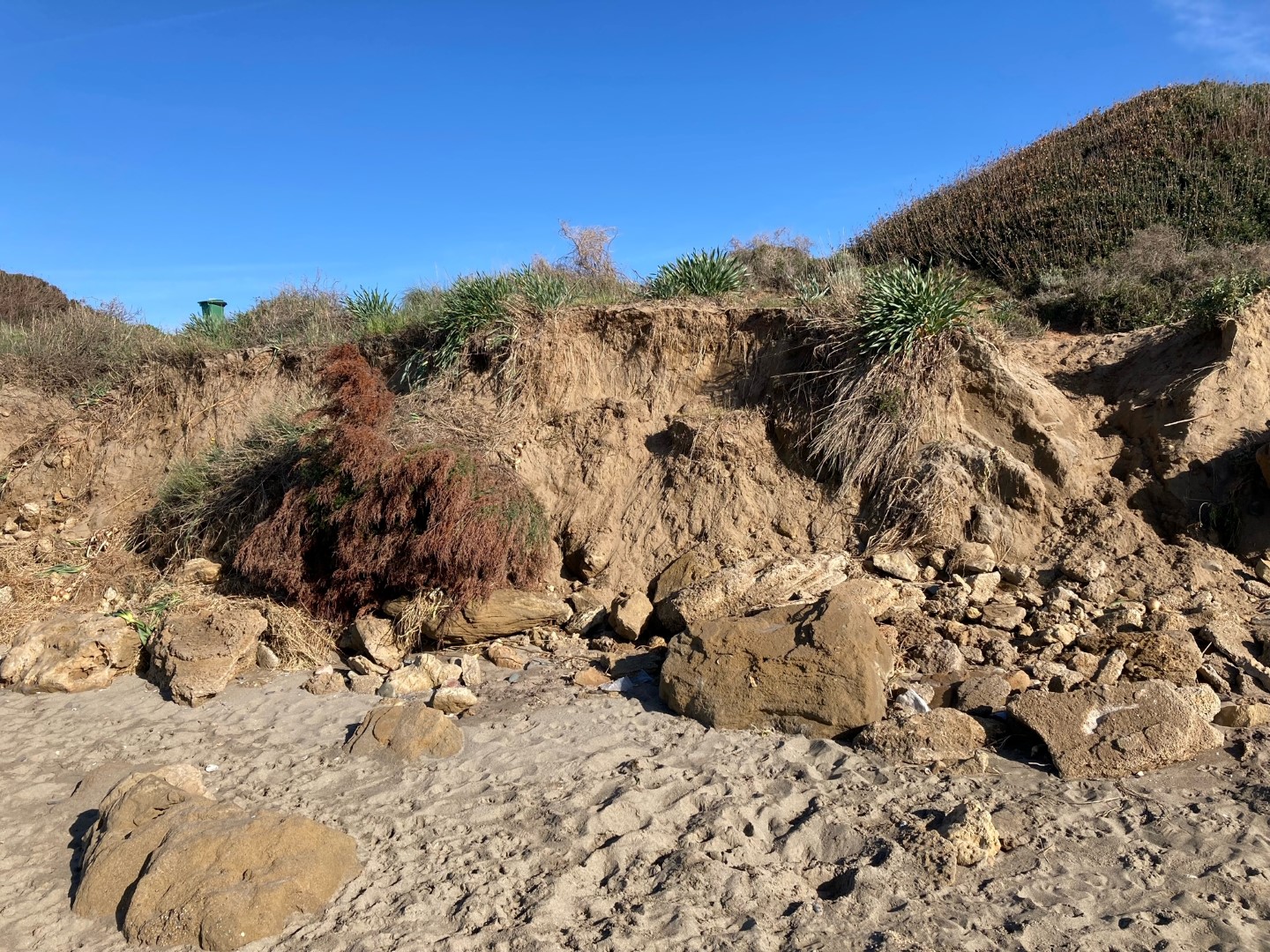 The first great catastrophic blow came in December 2016, followed by 3 more in 2017 and a further 3 in 2018, but all of them were less intense. This lulled us into a state of false security.

Because yesterday’s storm is very similar to the storms of 2016 we can venture to say that the damaging storms for the dunes and the Costa del Sol coastline are cyclical and happen every 5 years, with less harmful ones coming in the intervening years.

ProDunas Marbella is once again preparing the fight to have the various Administrations come out in favour of saving the coastline where it is defended by the dune formations – for the last 2 years we have been preparing all the criteria to be applied to this coast, including it in the project “Strategies for the Protection of the Coast between Cádiz – Málaga (Marbella) – Almería ”. In a second round of consultations we contributed our assertions to the criteria that, as we believe, to date things have been undervalued. Our friend Jared, Engineer of Roads, Canals and Ports has propounded these allegations in a volume of 57 pages.

The development of Coastal Protection Strategies, taking into consideration the effects of climate change in the Provinces of Cádiz, Málaga (Marbella) and Almería, is an initiative financed by the Directorate General for Structural Reforms (DG. REFORM) of the European Commission (EC), at the request of the Spanish Ministry for the Ecological Transition (MITECO) and the General Directorate for the Sustainability of the Coast and the Sea (DGSCM). This has the active collaboration of the Institute for Environmental Hydraulics at the University of Cantabria, among others.

The coastline is being lost and the survival of the Values of Nature in Andalusia is in danger. This could cause a major fall in valuable tourism in Marbella if we are not able to develop lasting and definitive solutions such as those proposed by ProDunas Marbella: multifunction artificial reefs must be installed on those parts of the seabed of the dune coastline to counteract the negative energy of the waves and onslaught of the storms. At the same time these would protect marine biodiversity and could promote the development of the highly valued Posidonia oceanica seagrass. Others seagrasses such as Cymodoceas nodosa and Zoster noltii are unfortunately more easily uprooted by these storms.

Hopefully the various Administrations – including Marbella Town Hall – will listen to this call and get moving on this urgent work.

This is our New Year’s wish! 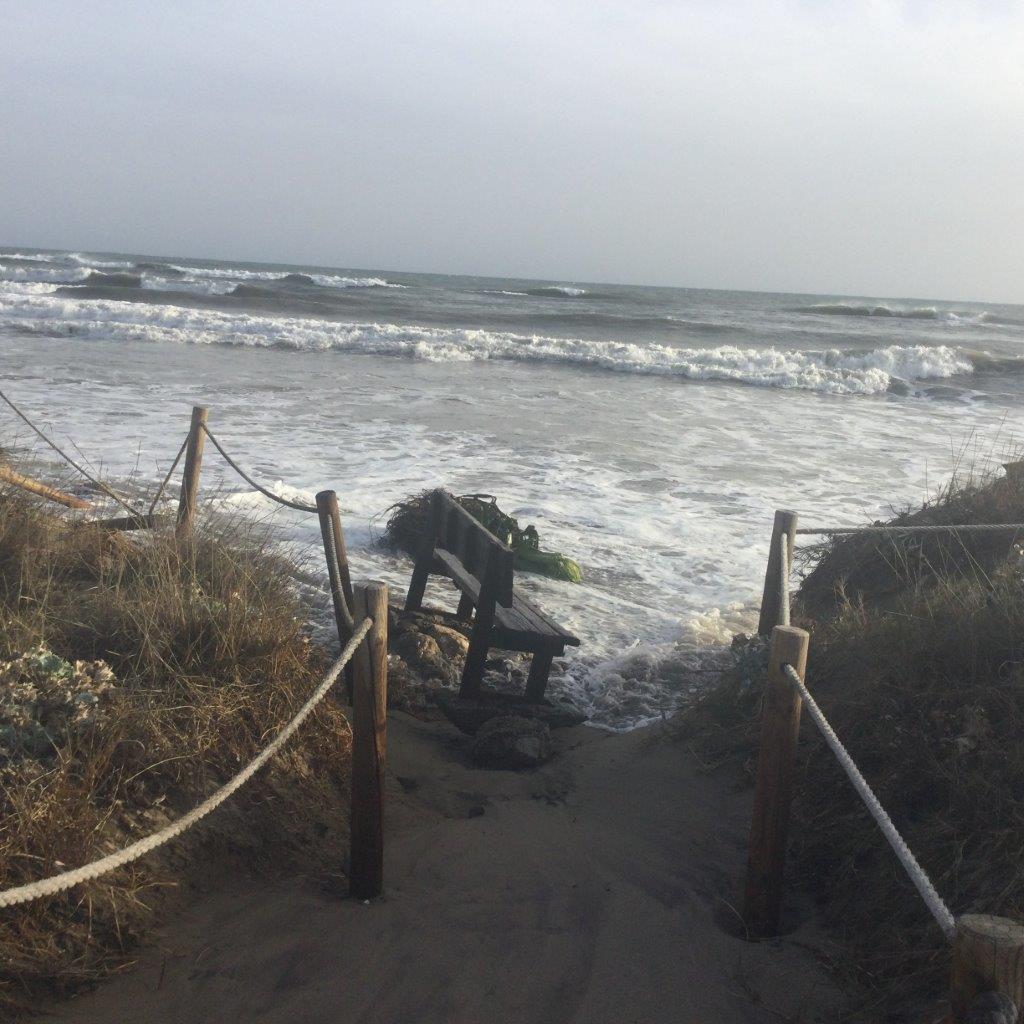 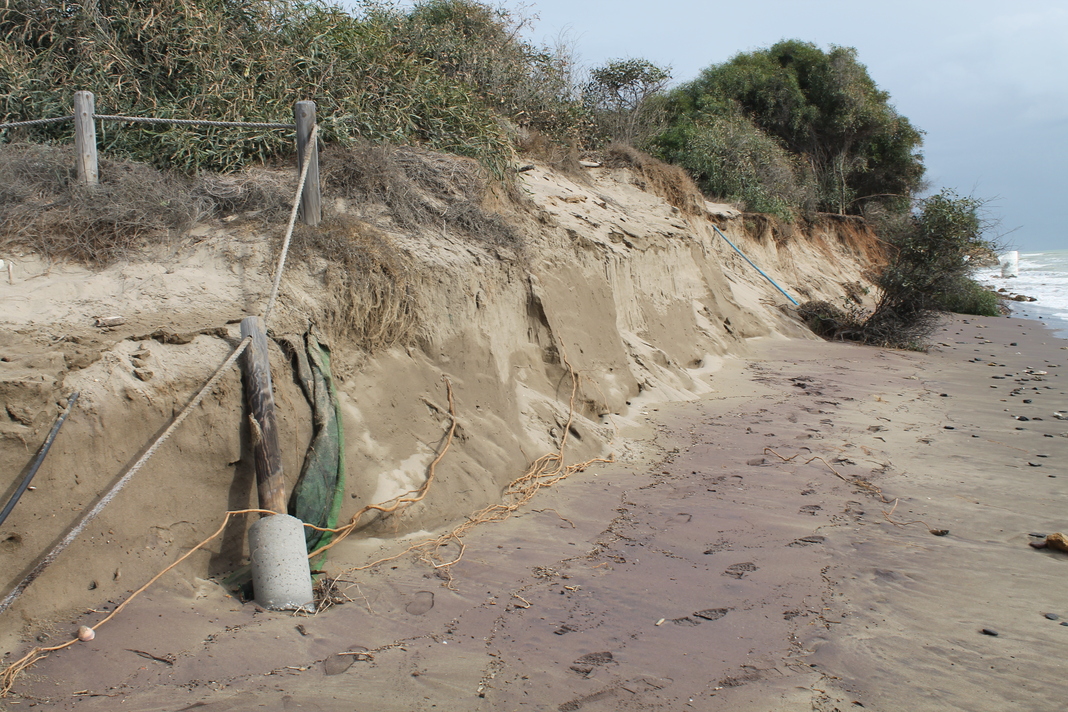 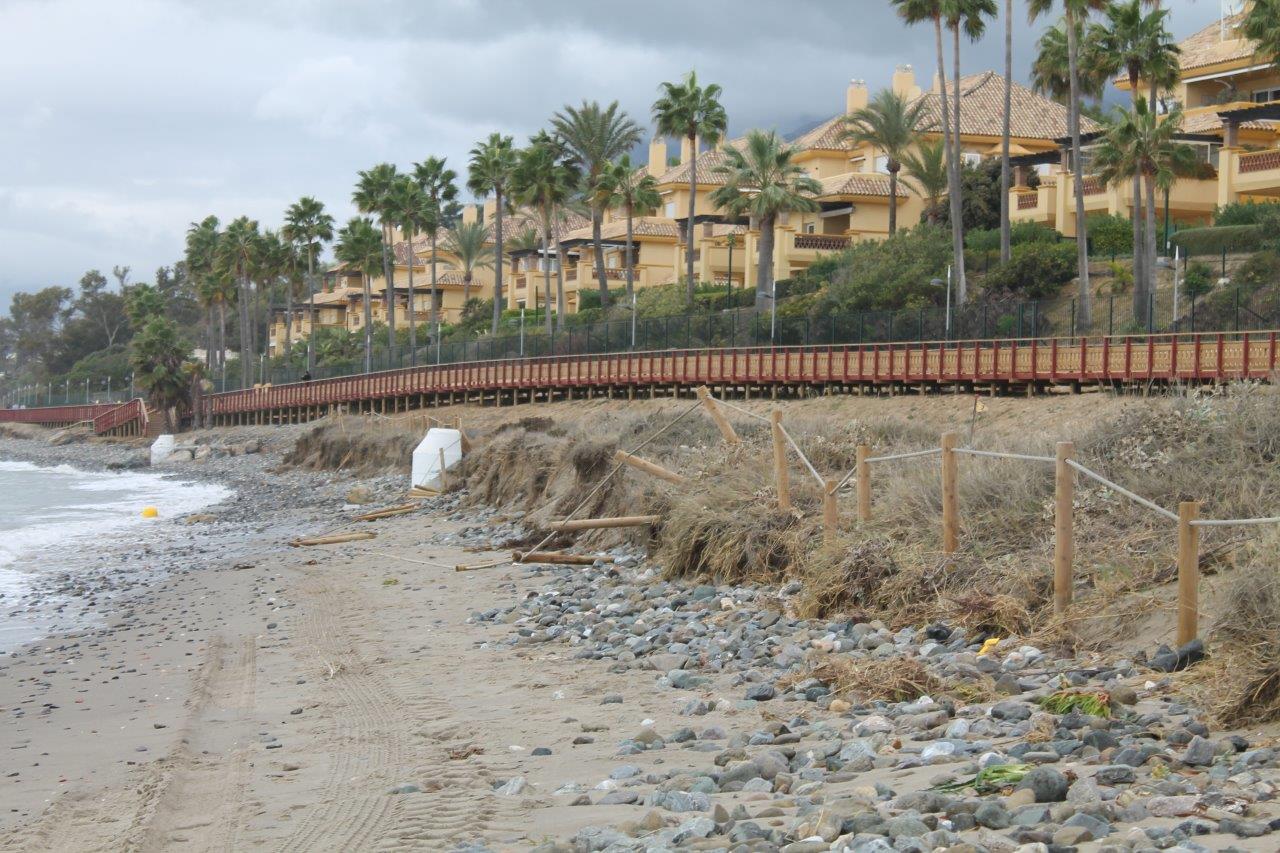 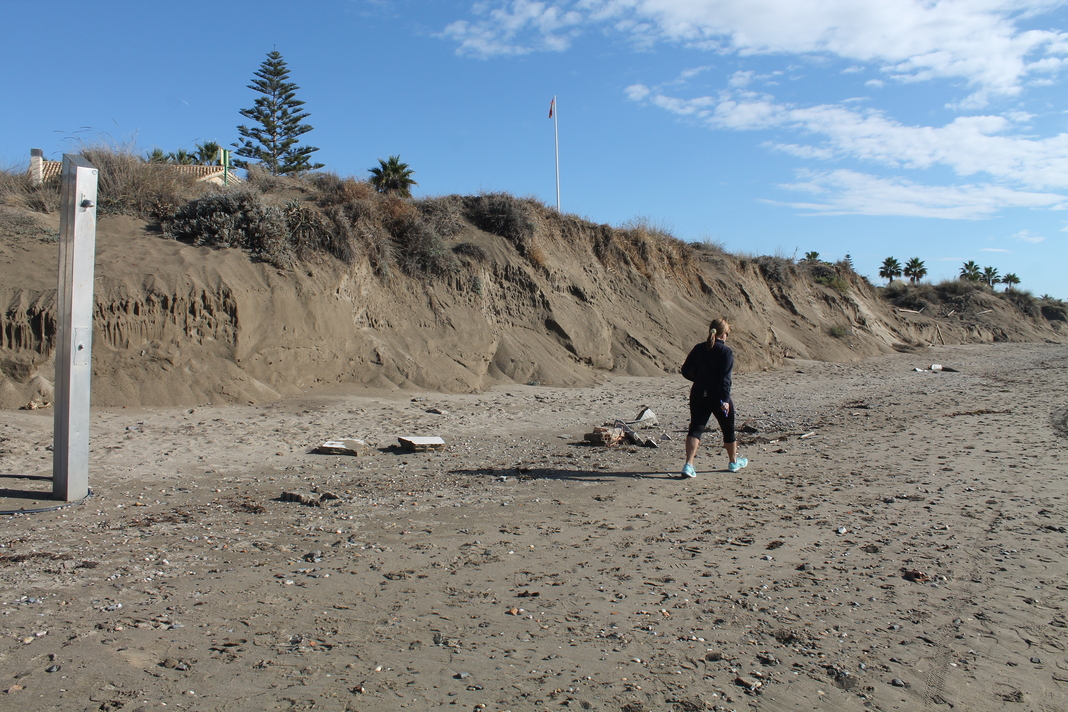 Our Association has made an in-depth study of the coverage collected in the assessments which have been presented and has made specific assertions as we consider that many of the points that are raised are no longer pertinent.

We have always fought for the various dune systems on this coastline. These, in our opinion are of equal or more value than a beach in Marbella itself and must be maintained and protected. Our motto is still totally valid: Without dunes, there are no beaches!

We hope that the various public bodies will carefully study the documentation we provide. It is totally reliable as can be proven by the photographic evidence we attach.

Allegations with Comments, Objections and Observations (57 pages) can be viewed in pdf (we regret, only in spanish): Link

We are grateful to our good friend Jared Ortiz Angulo Cantos – Civil Engineer, Channels and Harbours, Master in Coastal and Port Engineering – who has edited the texts presented by ProDunas.

6th April 2021
Strategies for the protection of the Coast in the Provinces of Cádiz, Málaga (Marbella) and Almería
taking into consideration the effects of climate change.

Second round of consultations and opening of the registration period until 31st May to allegations which may be considered pertinent and opportune to be presented, concerning the evaluations of basic information and identification of coastal units.

In the case of Marbella, we are finding information either outdated and / or inauthentic due to the rapid deterioration caused by huge erosion on the Marbella coastline, with the loss of both dunes and beaches.

However we are pleased that the problems are at least being addressed, although we are still far from being able to put forward our pilot pioneer project to embed multifunction artificial reefs on the seabed to the east of Marbella.

On 6th April 2021, the Secretary of State for the Environment summoned ProDunas Marbella and other actors to a meeting to report on the progress of describing the work carried out in 2020 on the strategies for the protection of the coast in the provinces of Cádiz, Málaga and Almería, taking into consideration the effects of climate change.

This work is part of an initiative funded by the Directorate General for the Support of Structural Reform of the European Commission and was convened at the request of the Ministry for Ecological Transition and Demographic Challenge (MITECO).

Mr. Hugo Morán: Secretary of State for the Environment.

Mr. Kaspar Richter: representing DG REFORM (European Commission). Mr Richter is Head of Unit for Sustainable Growth and Business Environment of the Directorate General for the Support of Structural Reform (DG REFORM) of the European Commission.

Mr. Ángel Muñoz Cubillo, Spanish Ministry for Ecological Transition, Deputy Director General for the Protection of the Coast and the Sea (DGCM). Presentation of the Strategy = work carried out to date, catalogue of the measures and their prioritisation.

ProDunas, as an interested player, was invited to present our criteria in finding strategies and solutions to mitigate the loss of the coastline. This we did at a meeting with the General Directorate for Structural Reforms (DG.REFORM) of the European Commission (EC) at the request of MITECO (Ministry for the Ecological Transition) and DGSCM (General Directorate for Sustainability of the Coast and the Sea) – the official Spanish organisations working with the European Commission.

The purpose of these consultations is to define strategies for Coastal Protection in the provinces of Cádiz – Málaga (Marbella) – Almería, taking into account the effects of climate change. Throughout this process we have been in contact with the European Union Commissioner tasked with protecting our coasts.
We have always had encouraging promises and now these are turning into concrete acts.

Once there is a recopilation of all the information of criteria, a second phase will be starting searching for strategies and physical measures to counteract the rapid erosion of the coast and to help with the stabilisation of the beaches. Artificial reefs are an essential part of this work as these would help dissipate the negative energy from waves produced as a result of the terrible spring storms that annually hit the Costa del Sol and that the dunes in Marbella can continue to act as a bulwark, a “containment dam” for the adjacent urbanizations.

ProDunas will continue to fight for the survival of the Marbella coastline. Our motto, designed to raise awareness is: Without dunes there are no beaches! 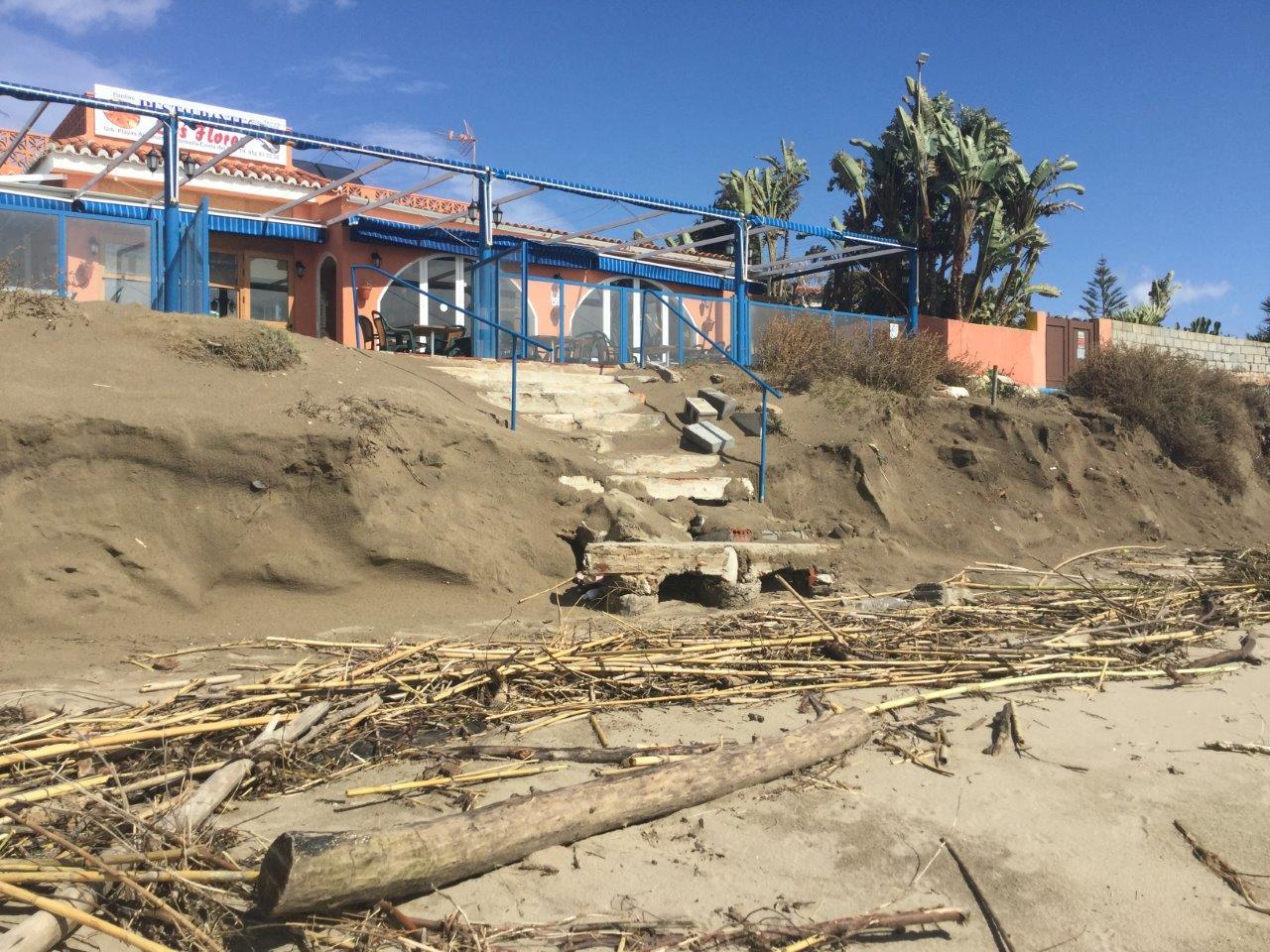 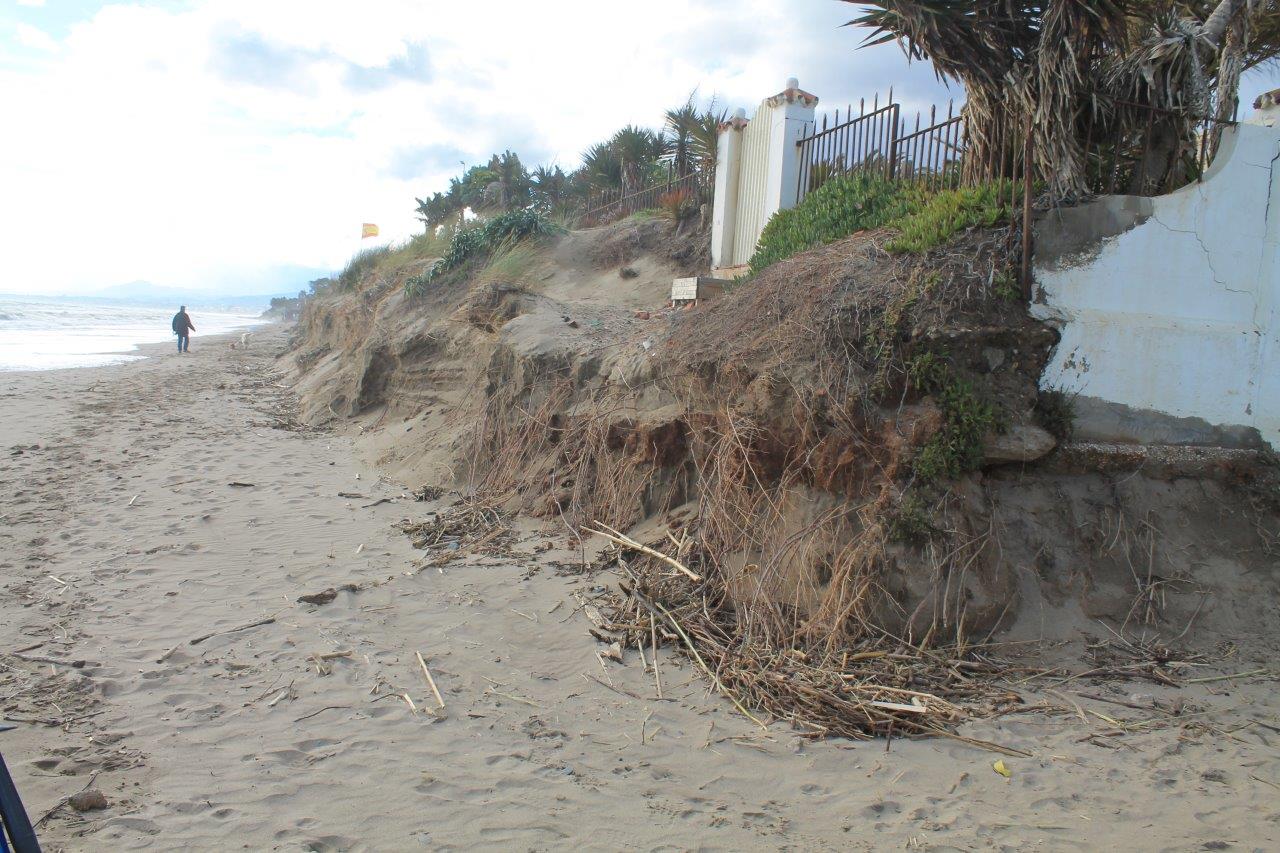 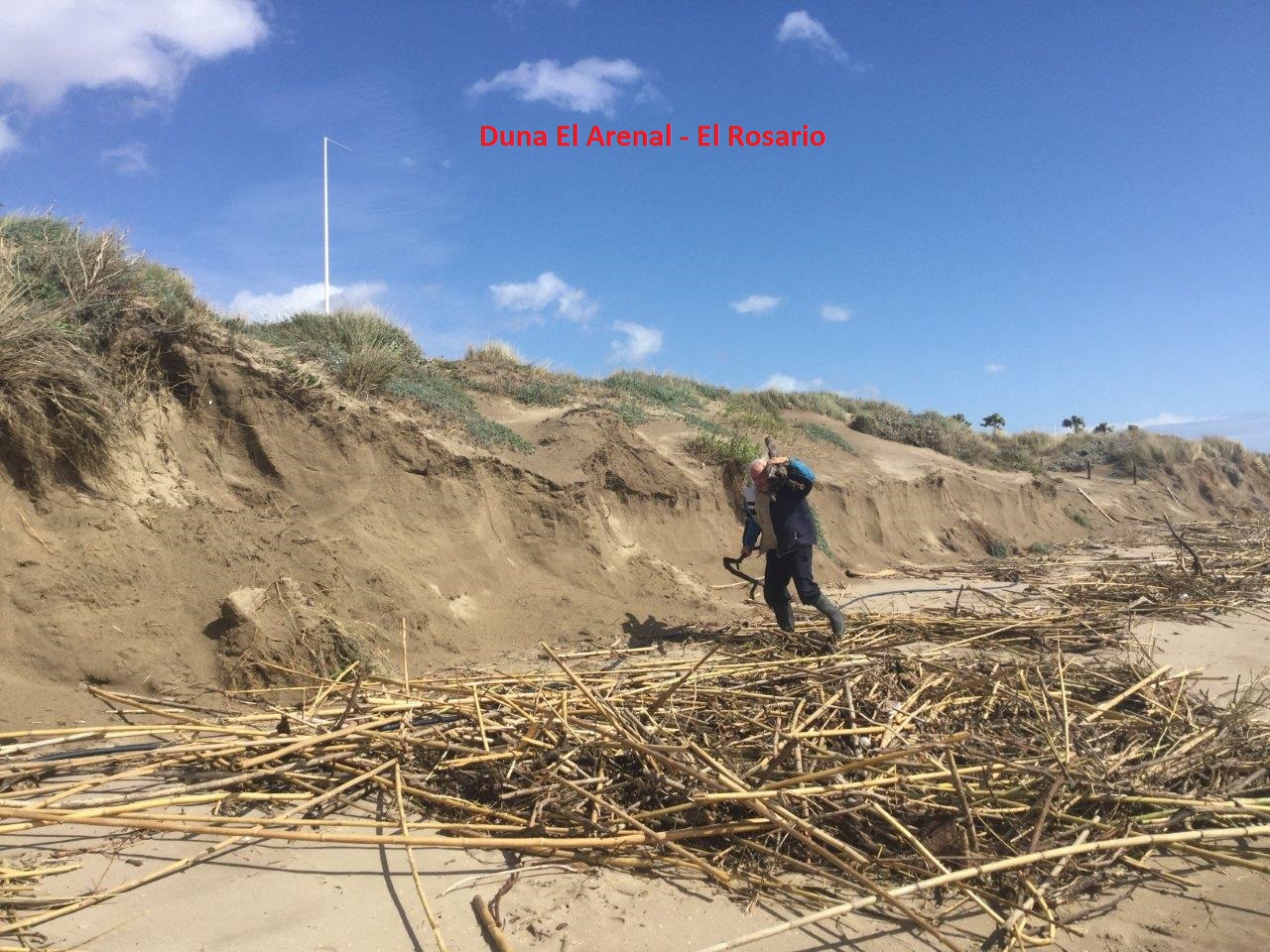 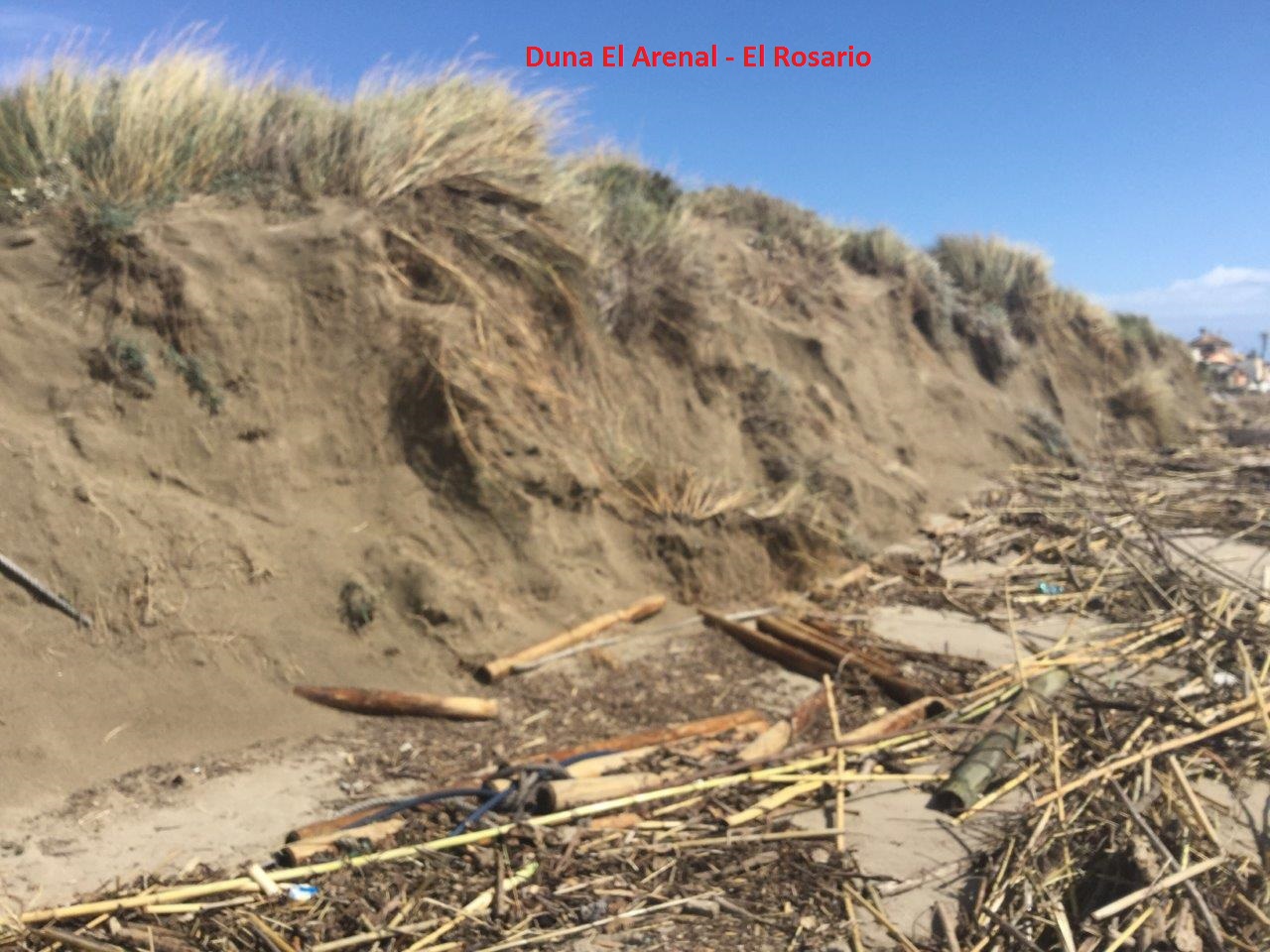 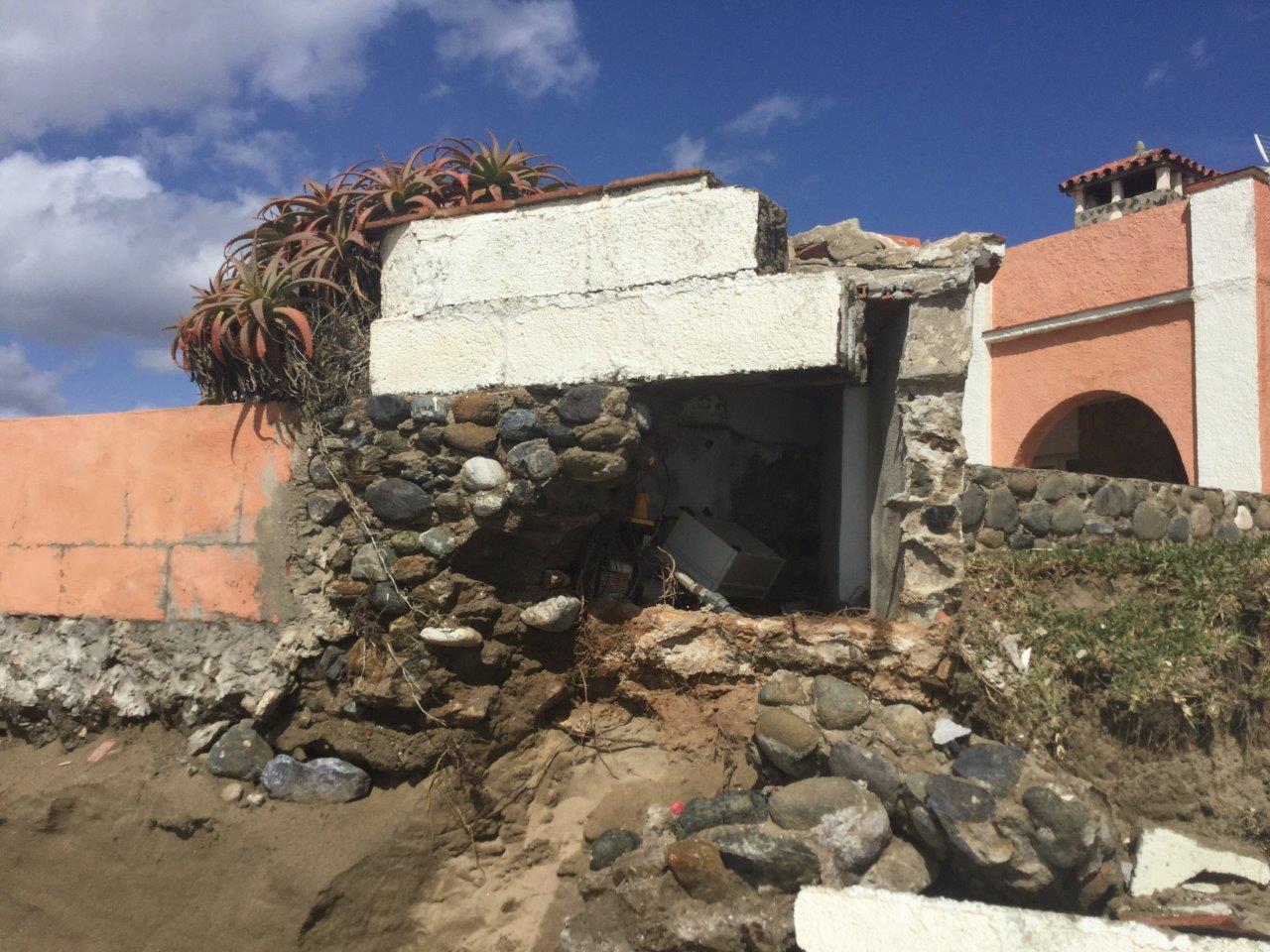 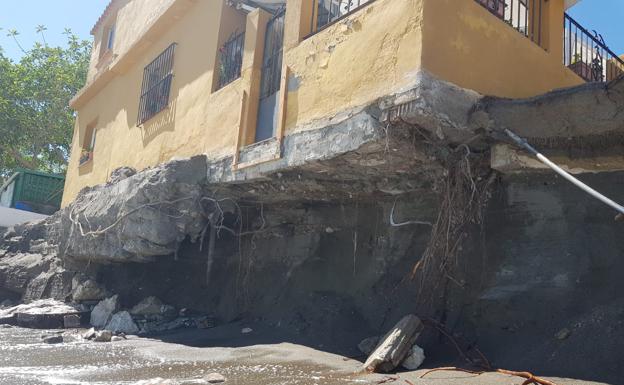 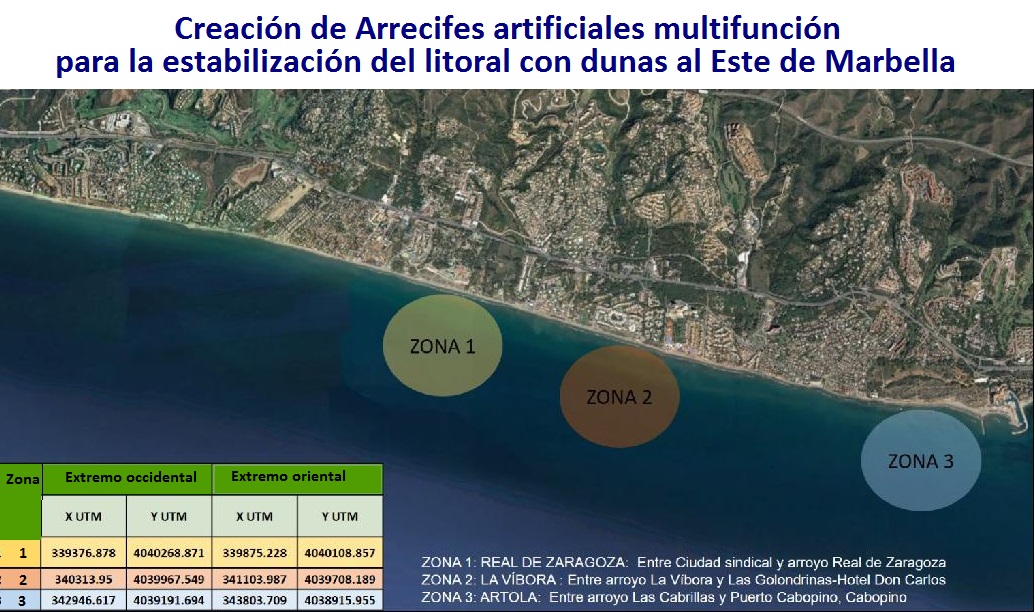 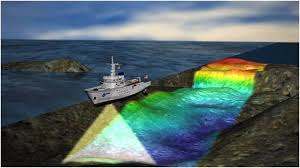 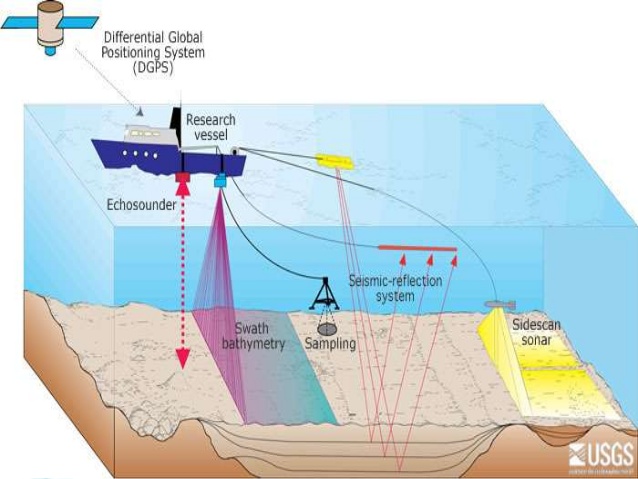