We got a call about the beaching of a Loggerhead sea turtle (Caretta caretta) and we responded without wasting time. Unfortunately when we got to it, it was dead.

The Loggerhead Turtle is the smallest and most plentiful sea turtle in the Mediterranean. It can grow up to 120 cm and weigh about 120 kg. Ours measured about 97 cm from head to tail. She weighed approximately 50 kg, so it can be assumed that she had not eaten properly for a long time.

We hope that summer does not up the number of beaching of either dolphins or sea turtles. 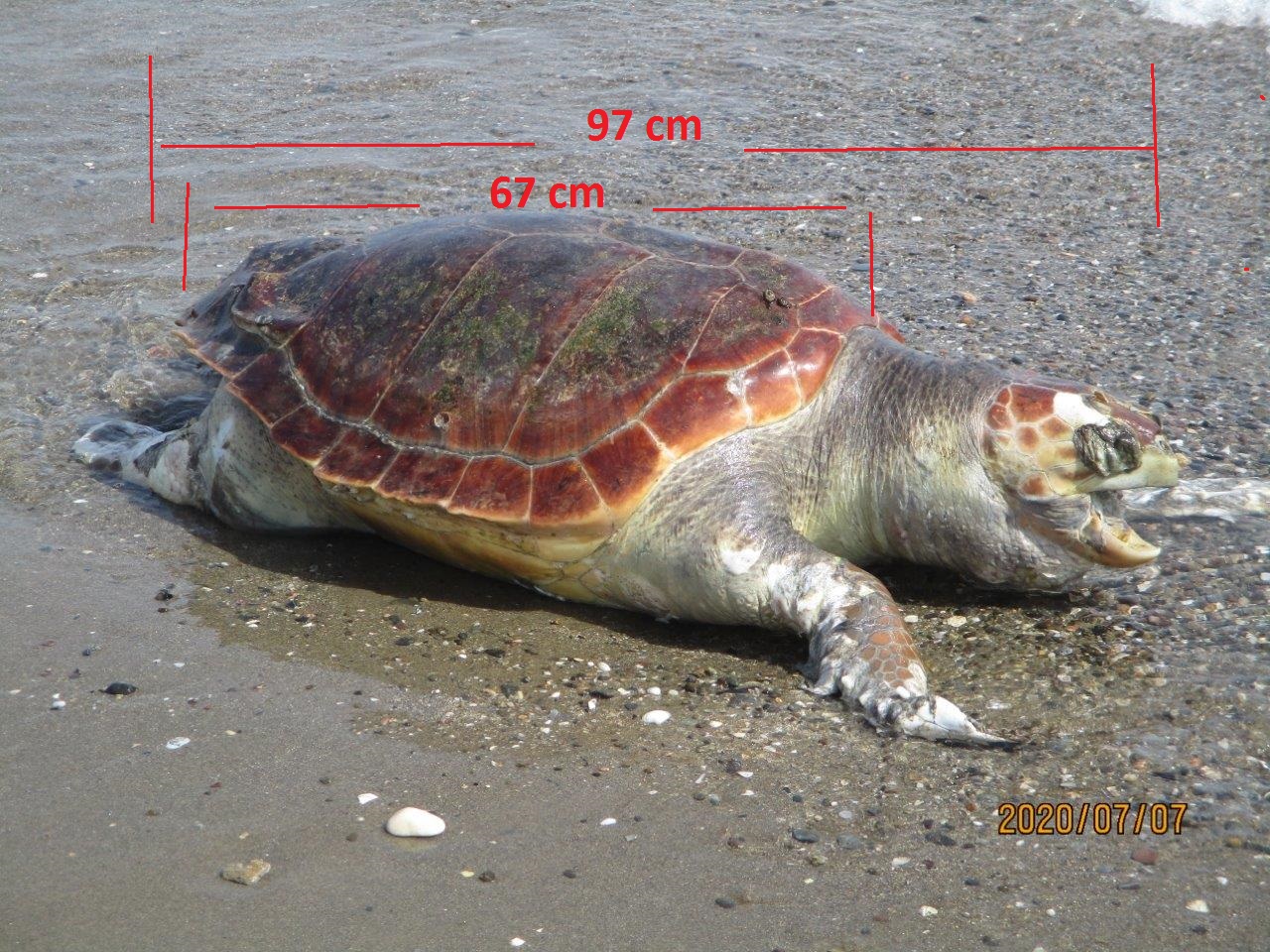 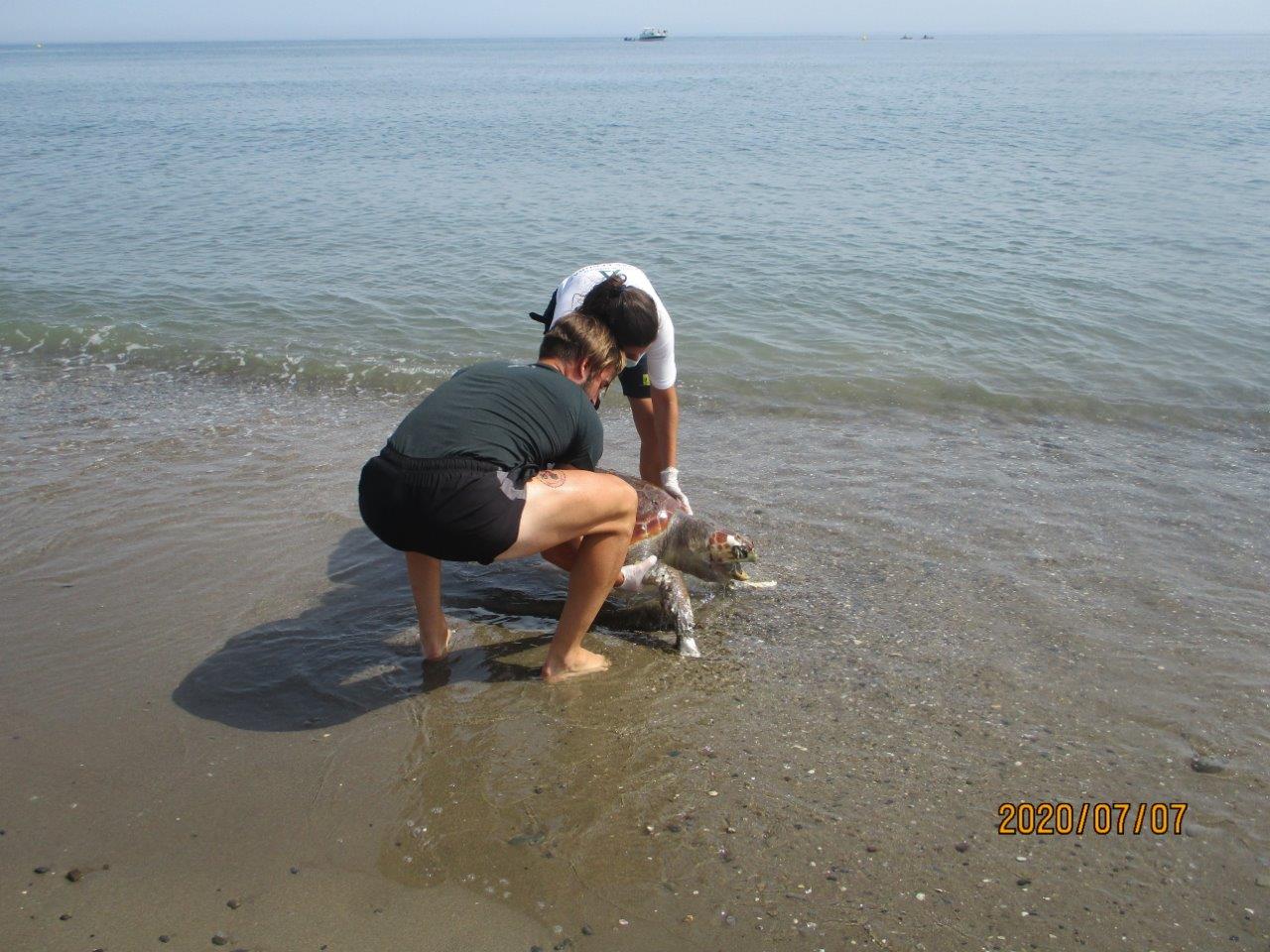 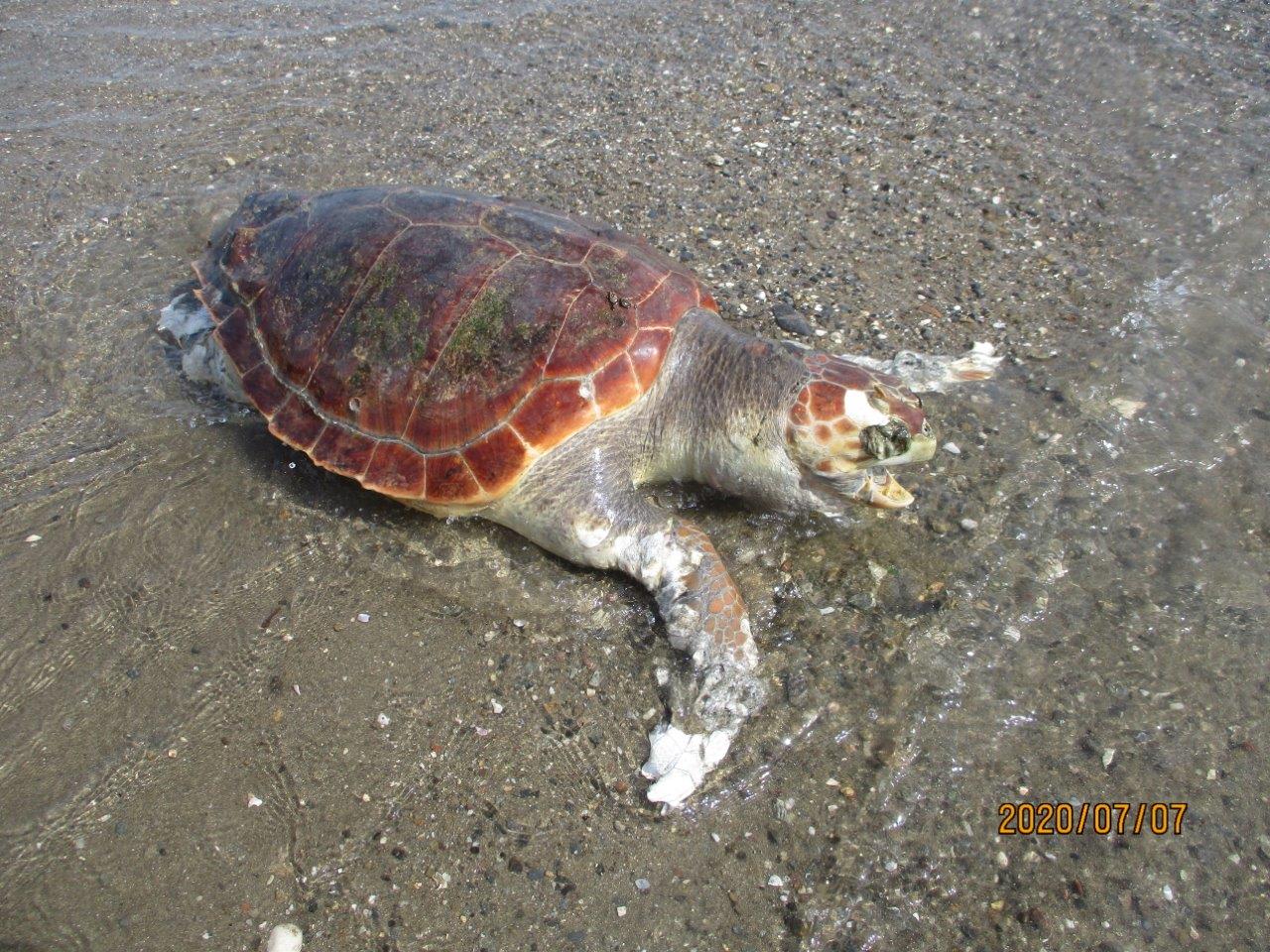 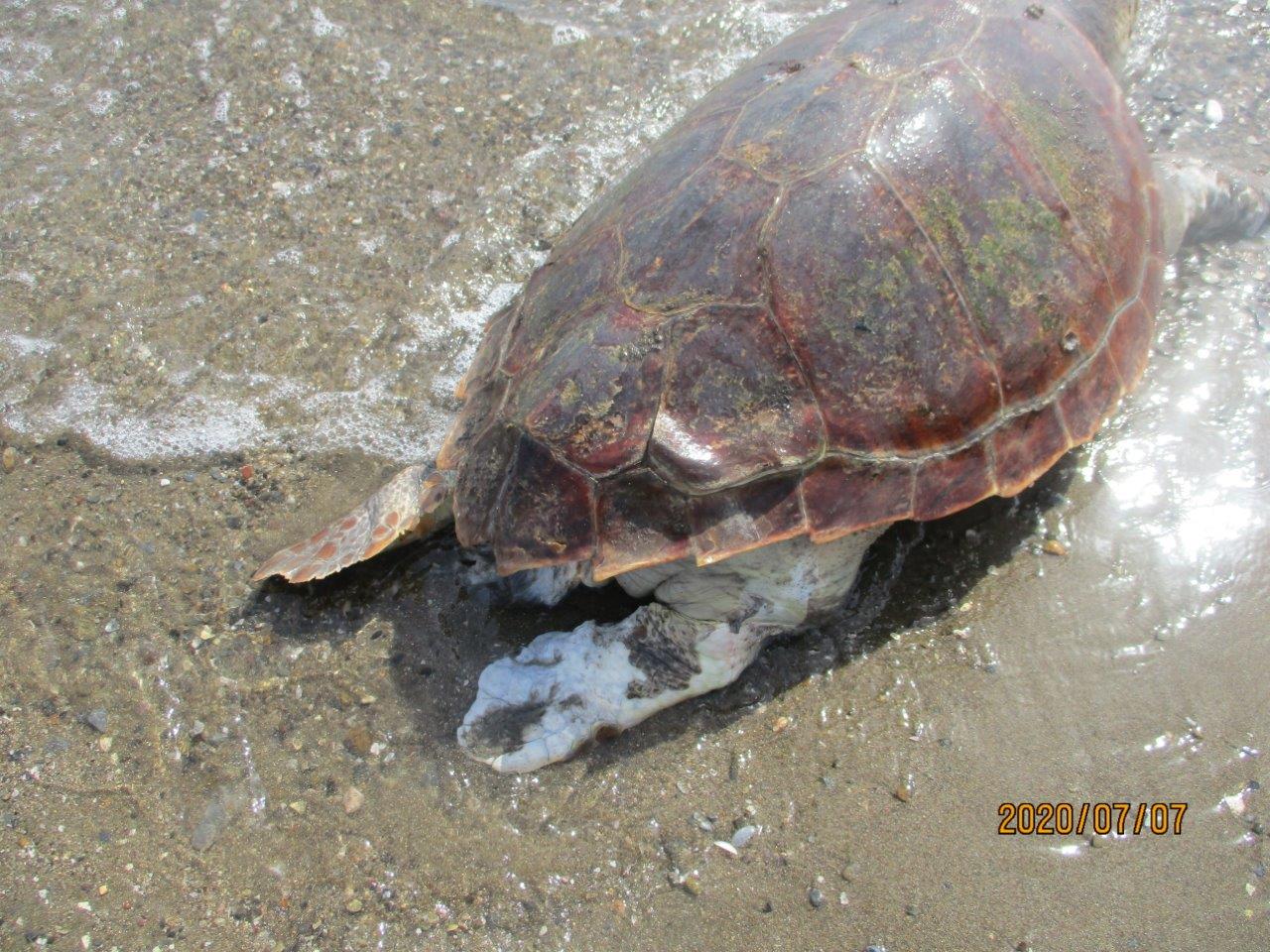 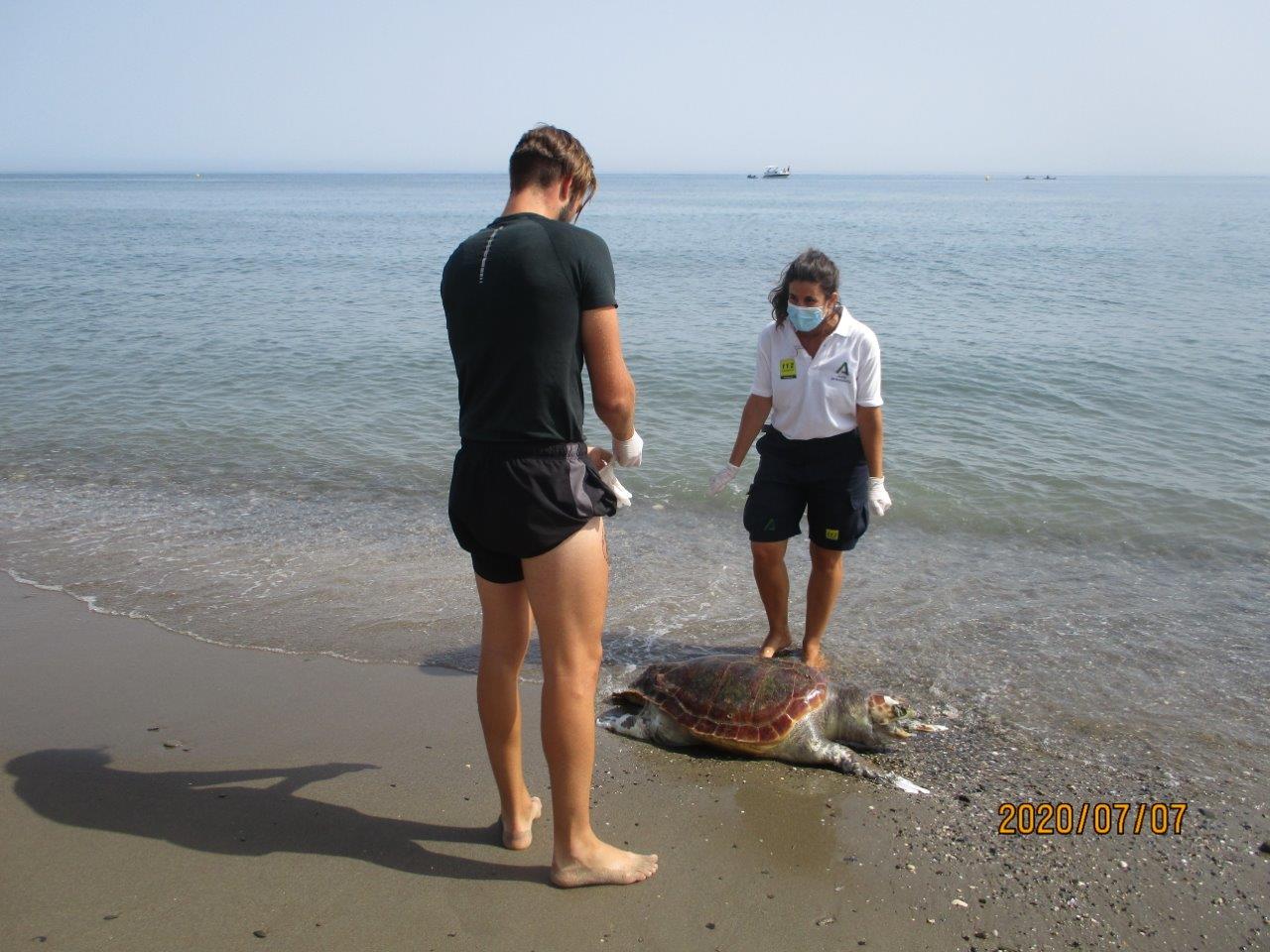 11th June 2020
BEACHING OF A BEAUTIFUL YOUNG DOLPHIN IN ESTEPONA

We were alerted that a young Striped Dolphin (Stenella coeruleoalba) had been seen stranded in Estepona.

Unfortunately it was already dead when it was washed up on the beach. The strong breakers and south-southwest winds helped to drive it onto the shore. Together with Patricia, our co-worker in the area, we alerted the agents who normally deal with cases of this kind. Not all the CREMA staff is active yet. The side effects of Covid-19 are still being felt.

Environmental Agents from the Junta de Andalucía were rapidly on the scene and took the corpse of young dolphin to the CEGMA in Algeciras where they carried out a proper autopsy. It was negative for diseases and gave no indications as to the cause of death. 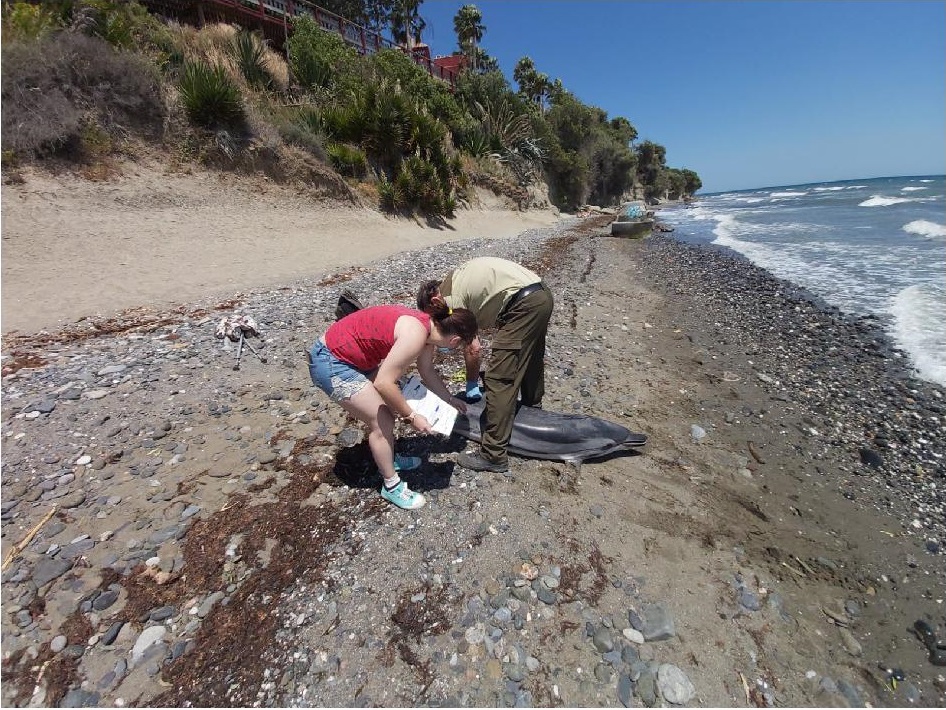 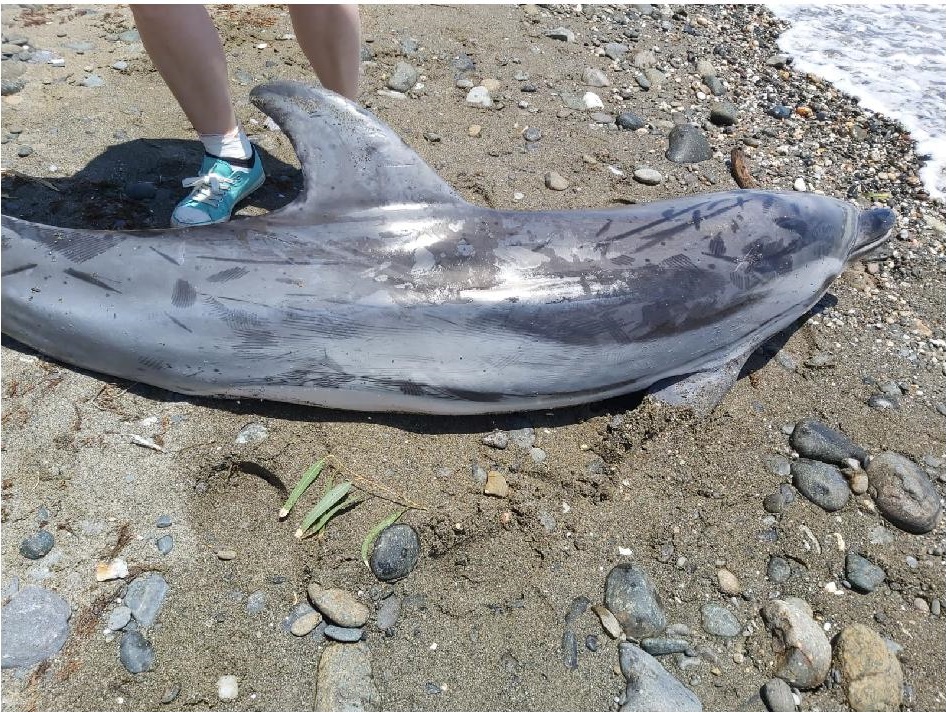 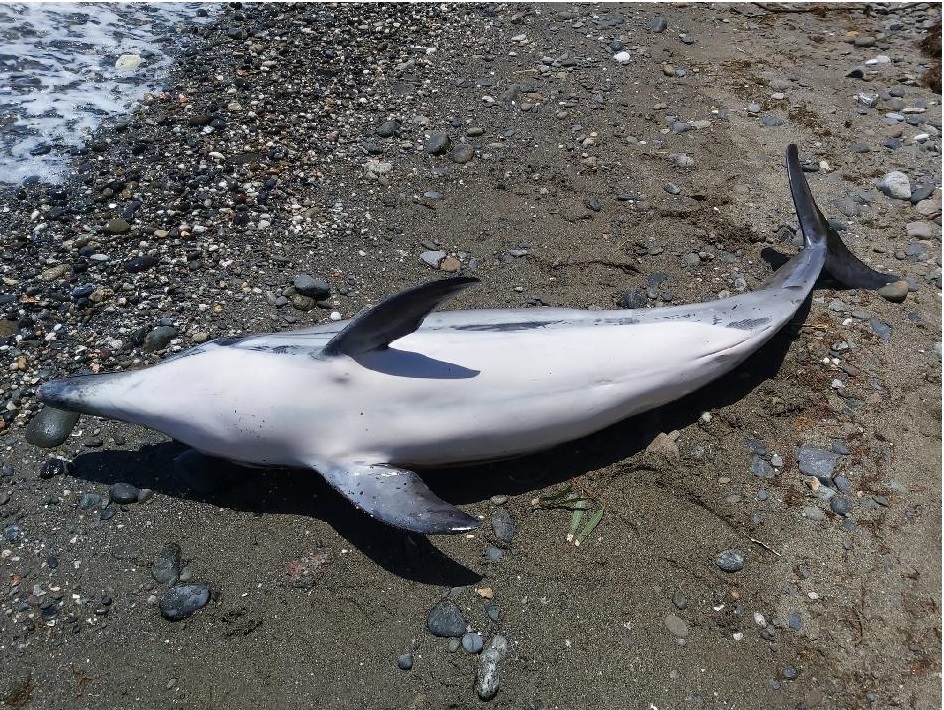 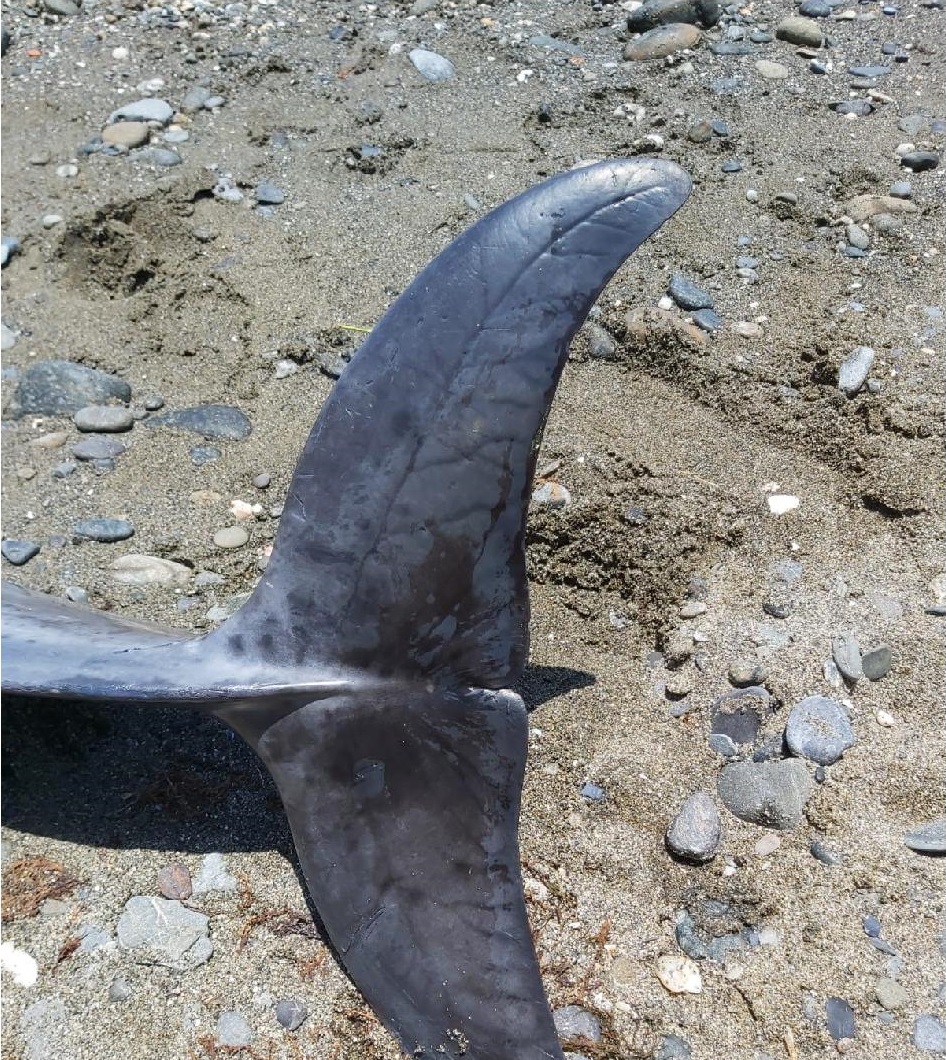 SEPTEMBER 2019 – PRODUNAS AND THE BEACHED FEMALE DOLPHIN IN ESTEPONA

Not long ago ProDunas got a telephone call from a distressed Swiss tourist concerning a dolphin stranded on the Atalaya Istabe beach in Estepona. Our team of volunteers in that beach area quickly got together to help the animal and console the large group of people who were powerlessly witnessing the desperate struggles of the cetacean.

Over the phone we told them how to keep its skin damp by using towels. These were quickly supplied by nearby hotels. Any time a sea creature is beached you have to pay close attention to making sure that the spiracle (the hole they breathe through) is not obstructed by a towel or that water is not poured into it.

The swimmers tried over and over again to get the dolphin back into the sea, but the waves were too high, the undertow too strong and there was a west wind blowing. The dolphin was worn out.

When we got there, the dolphin was already dead. All we could do was get the pertinent protocol for the initial inspection measures underway. It turned out to be a female of the Striped Dolphin family (Stenella coeruleoalba). She had observable wounds on her snout and lacerations on her face and the sides of her body due to crashing against the rocks. Even though she was big, measuring 2m, she was flabby, which made us suspect that this young female had serious health problems.

The CREMA team in Malaga responded to our call and took the body of female dolphin away to carry out a thorough necropsy. The samples showed that the cetacean was very sick and several of her organs were affected. She could not possibly have survived. No traces of plastics were found.

We would like to thank everyone who helped to try to keep the beautiful dolphin alive, as well as the SEPRONA team, who stayed with everyone for the entire duration of the rescue. Thank you! 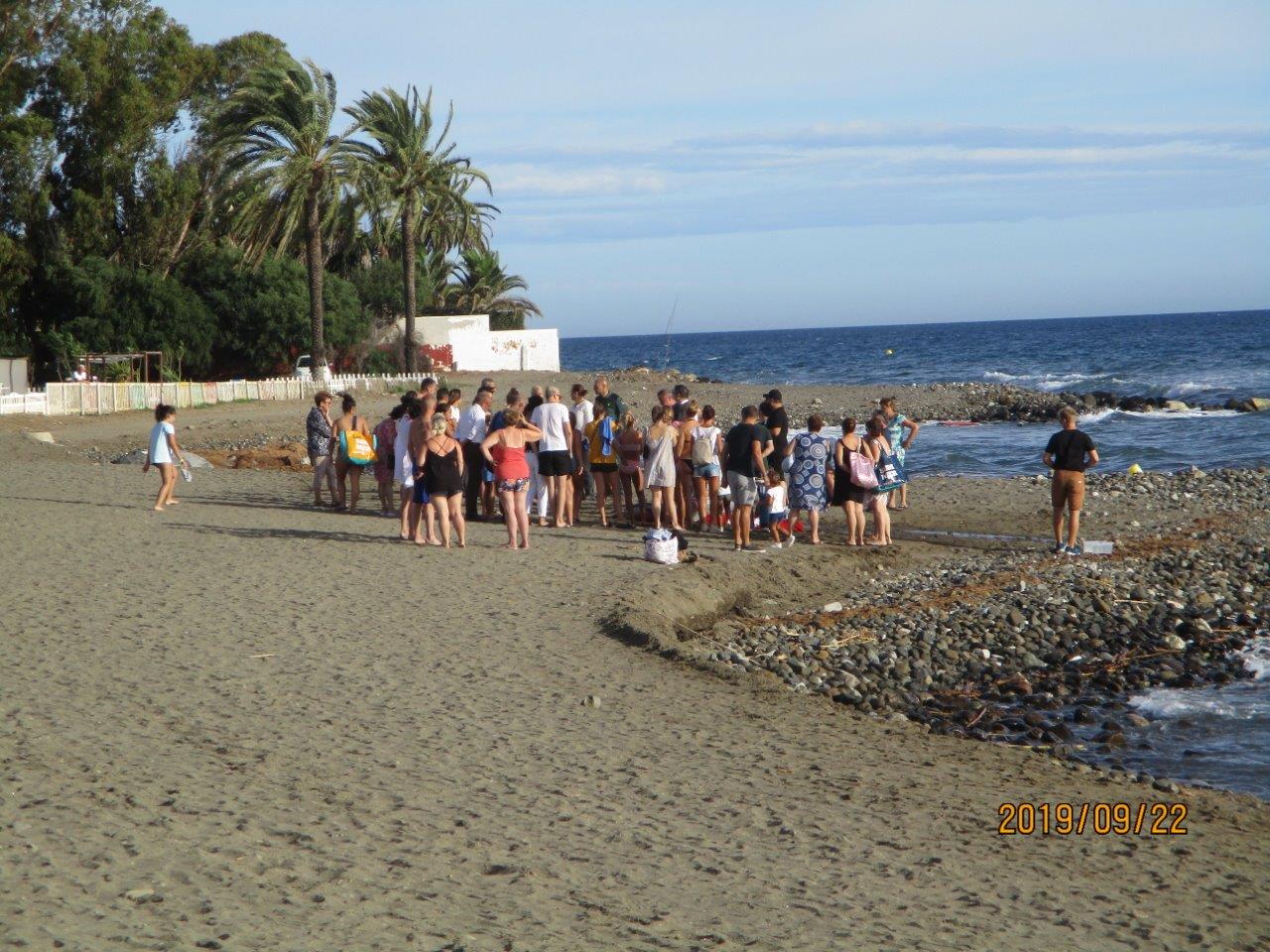 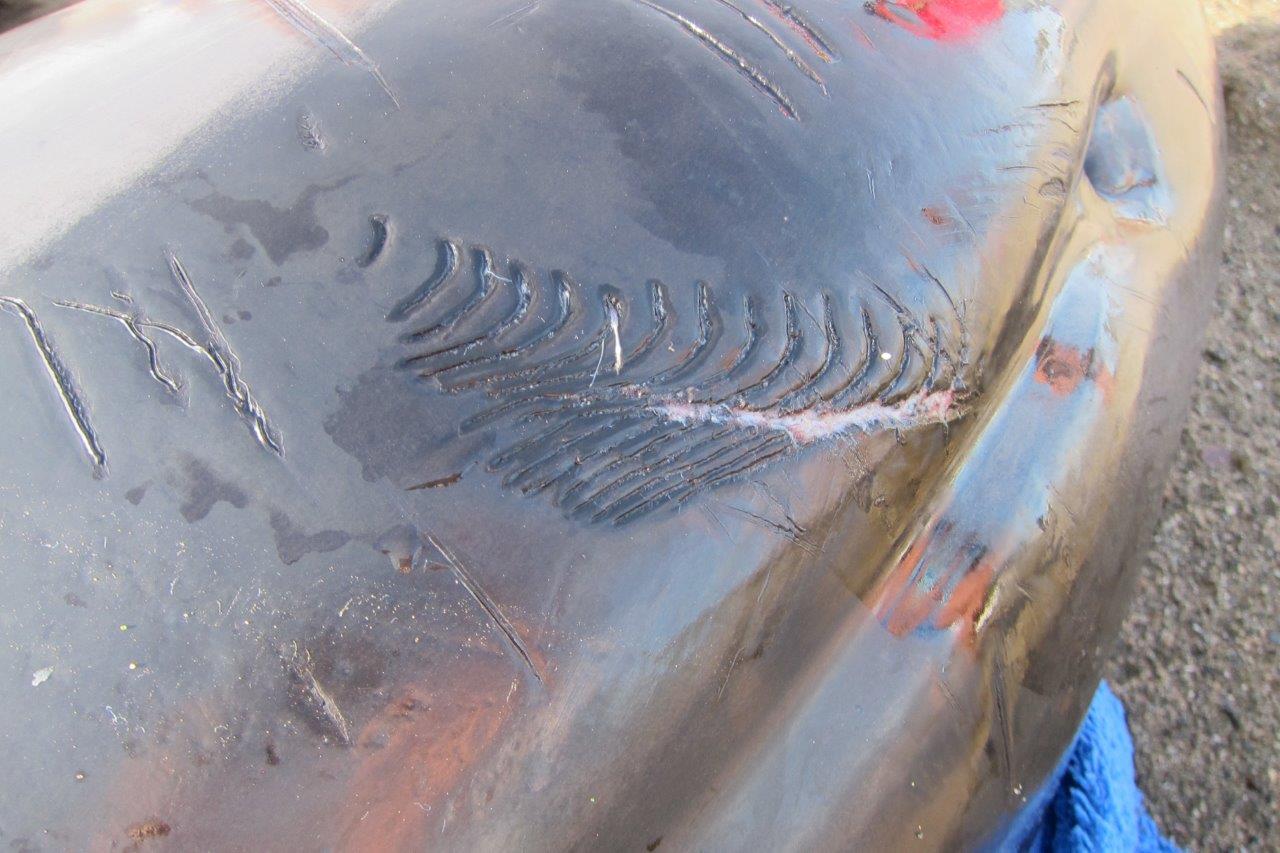 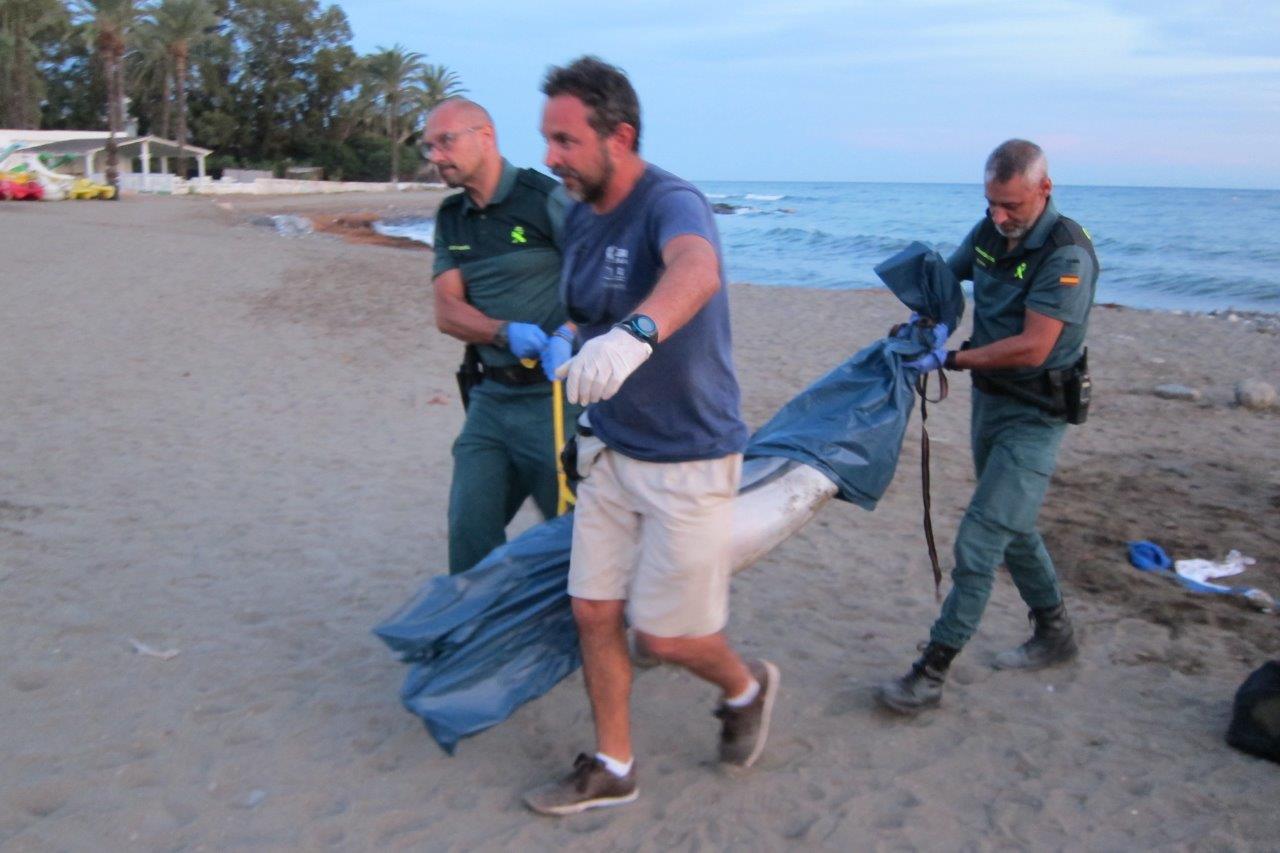 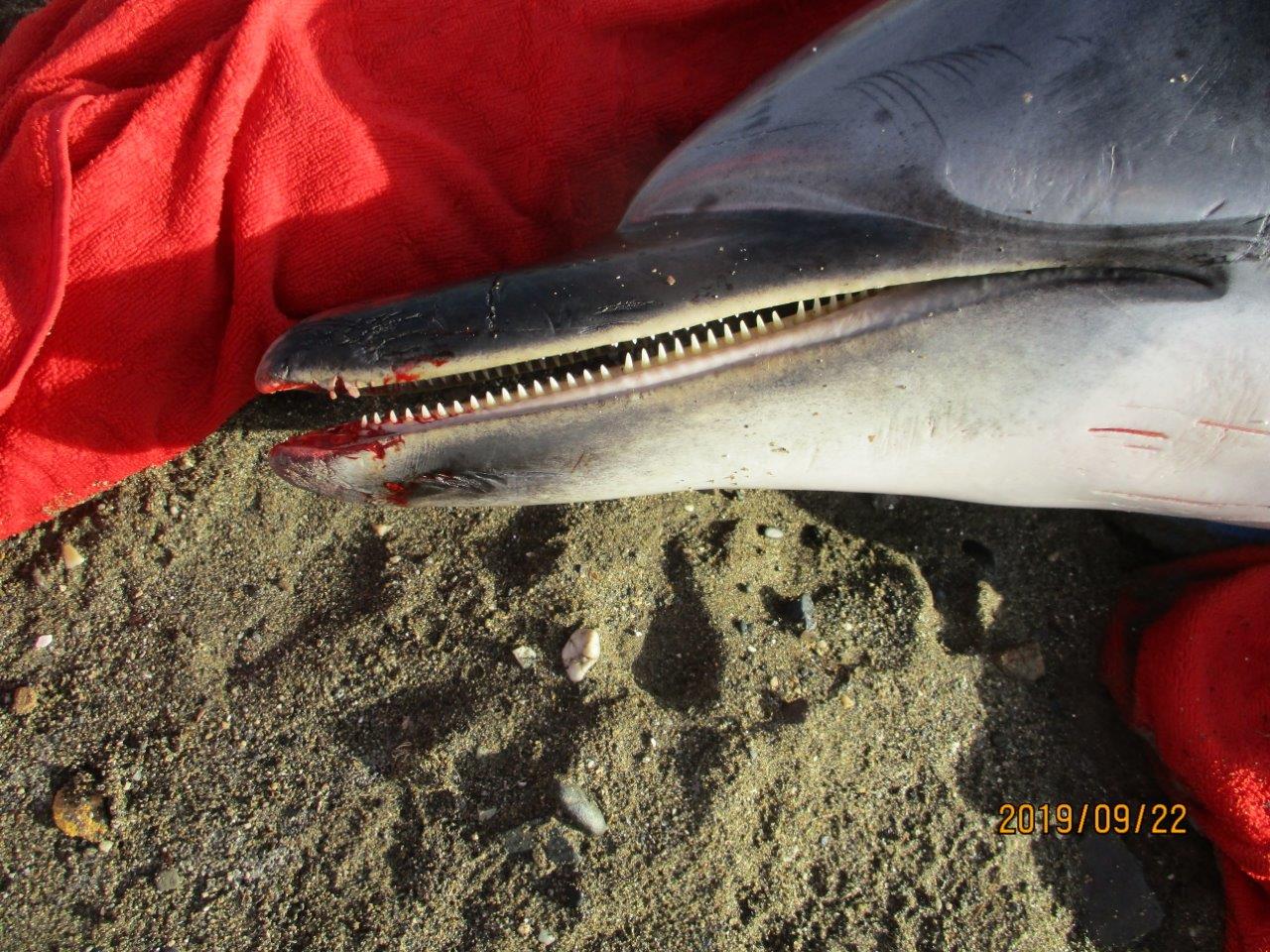 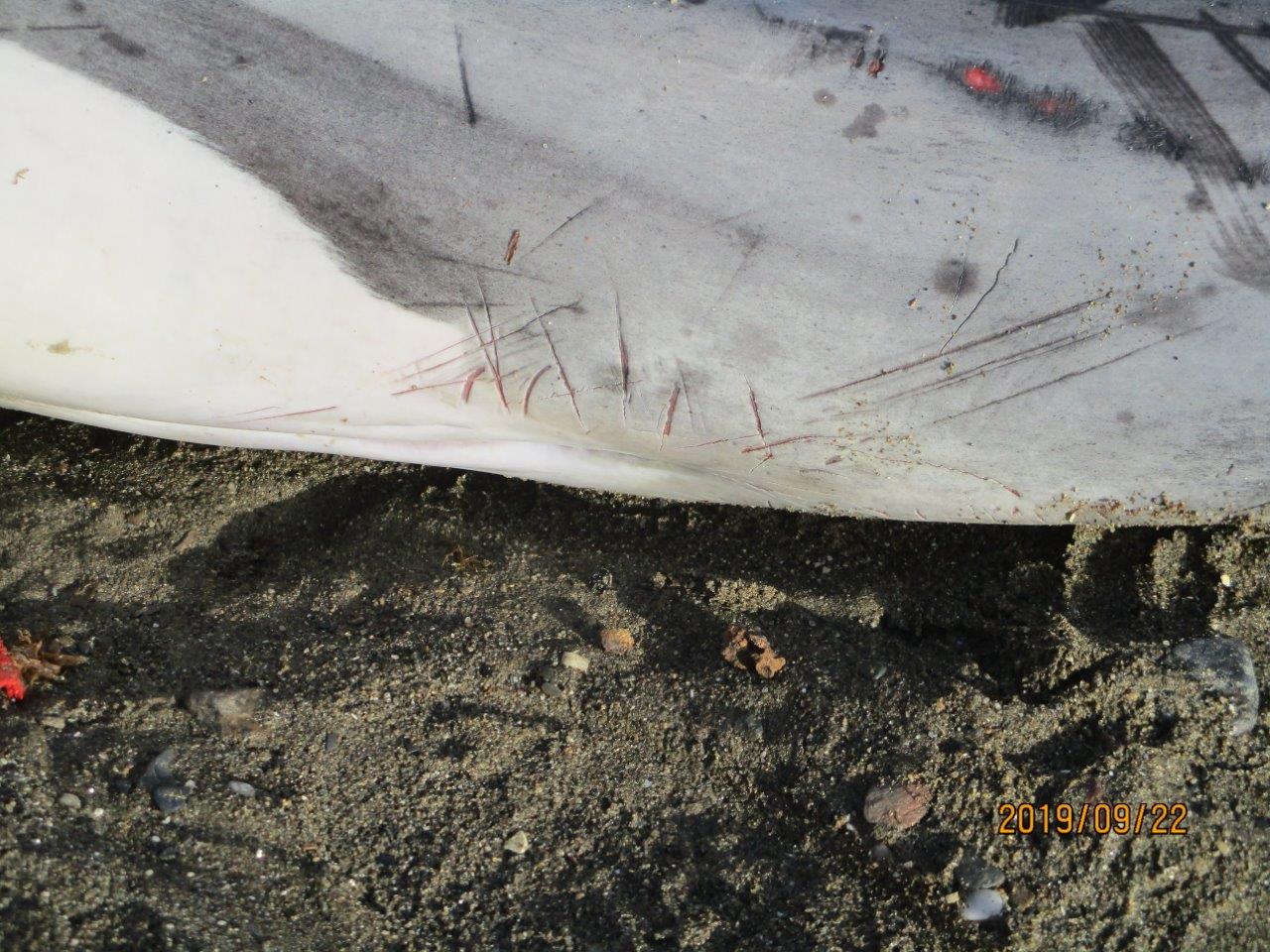 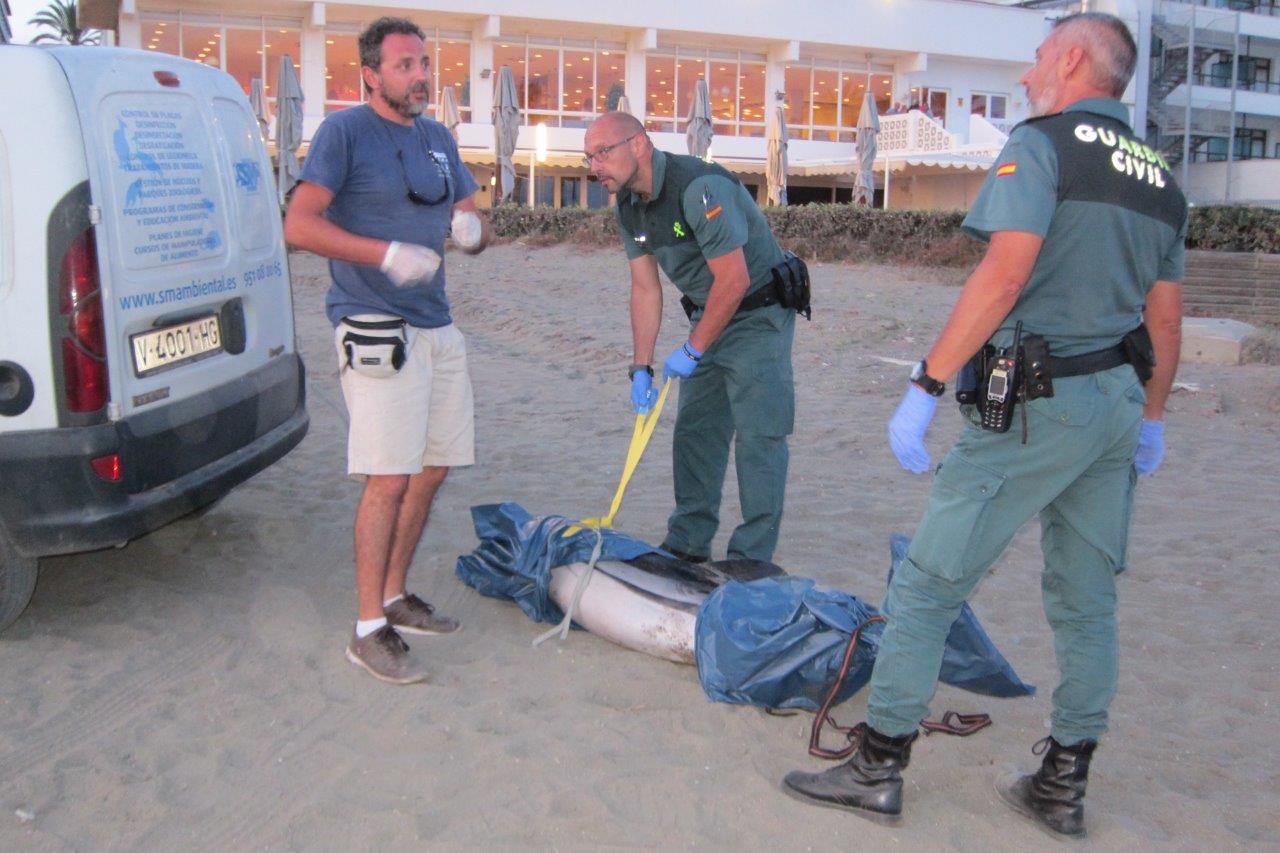 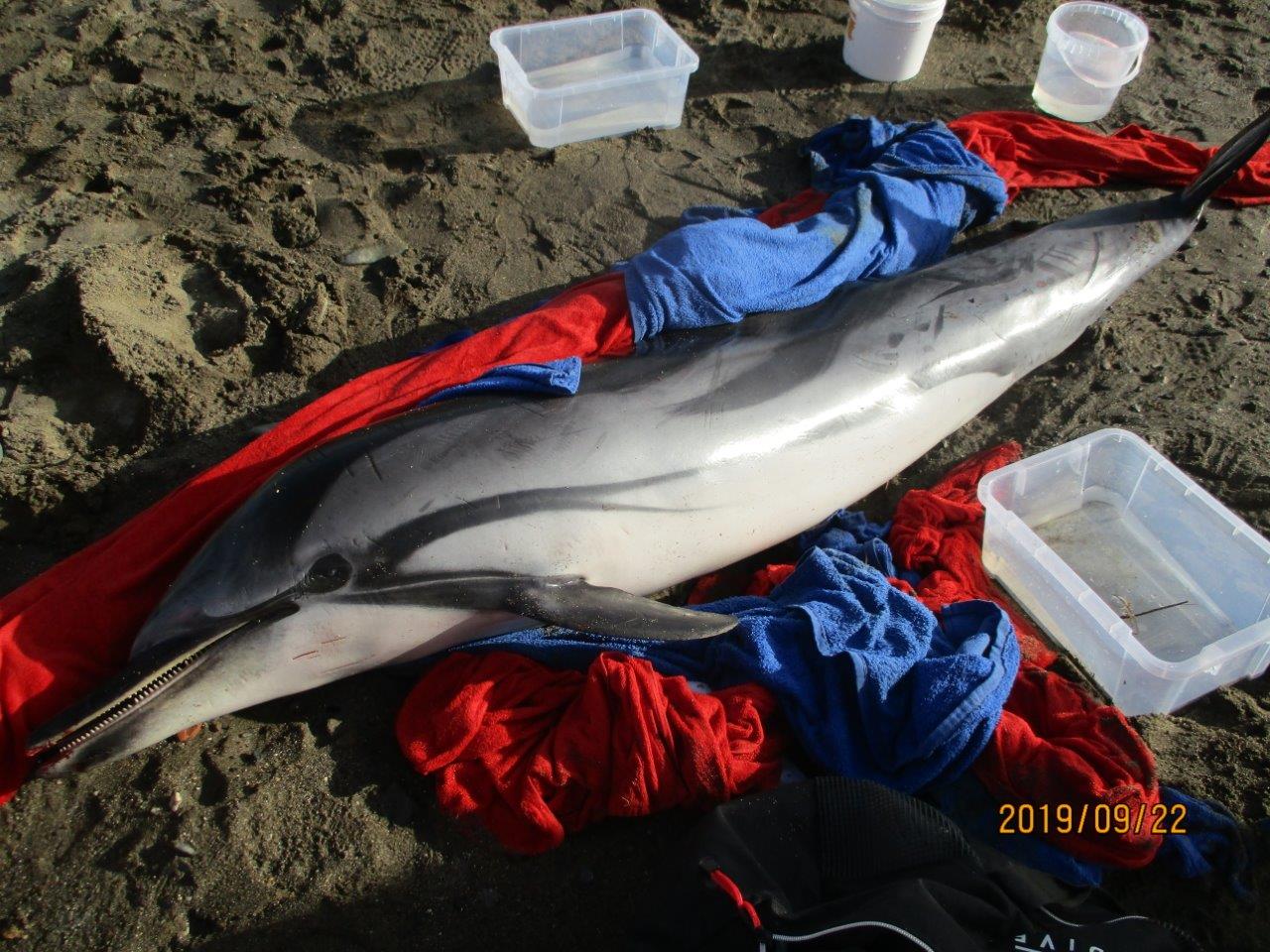 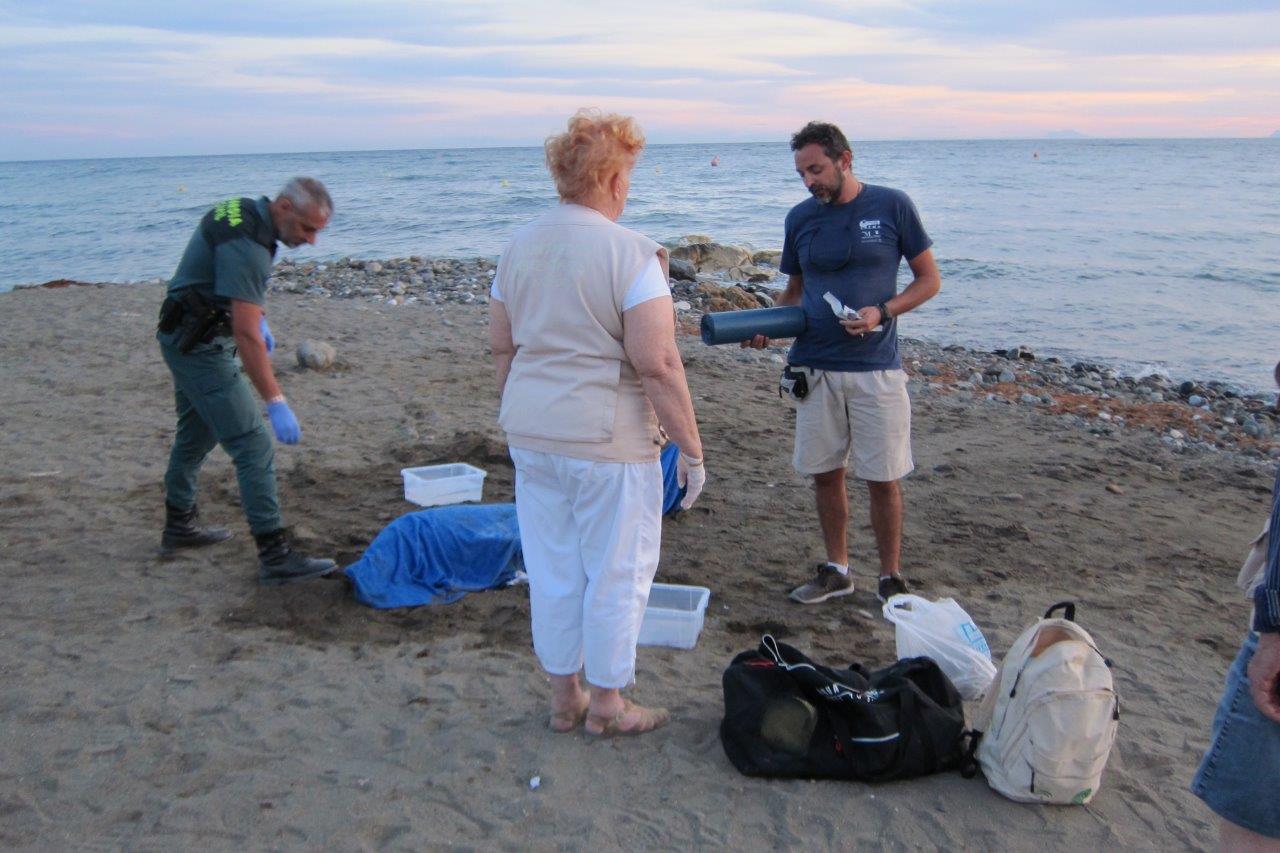 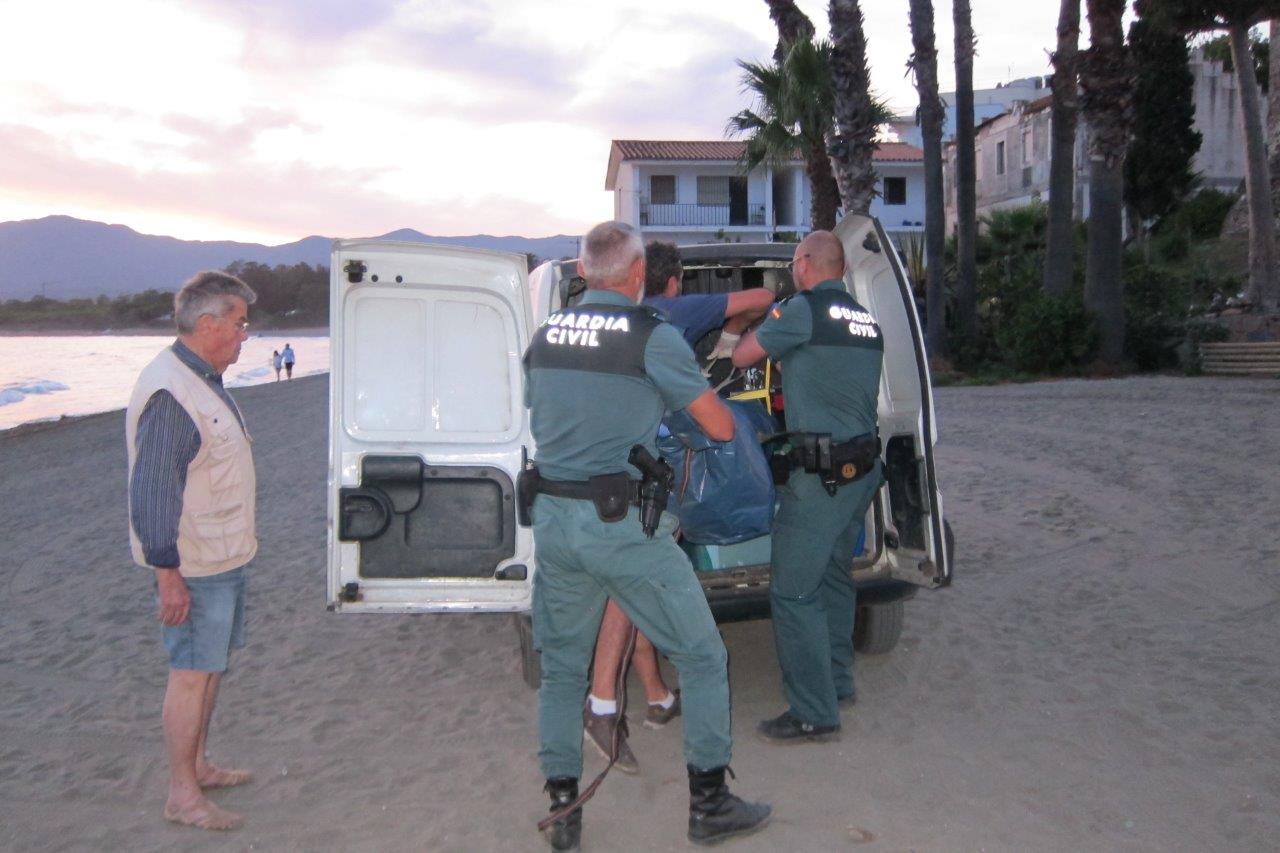 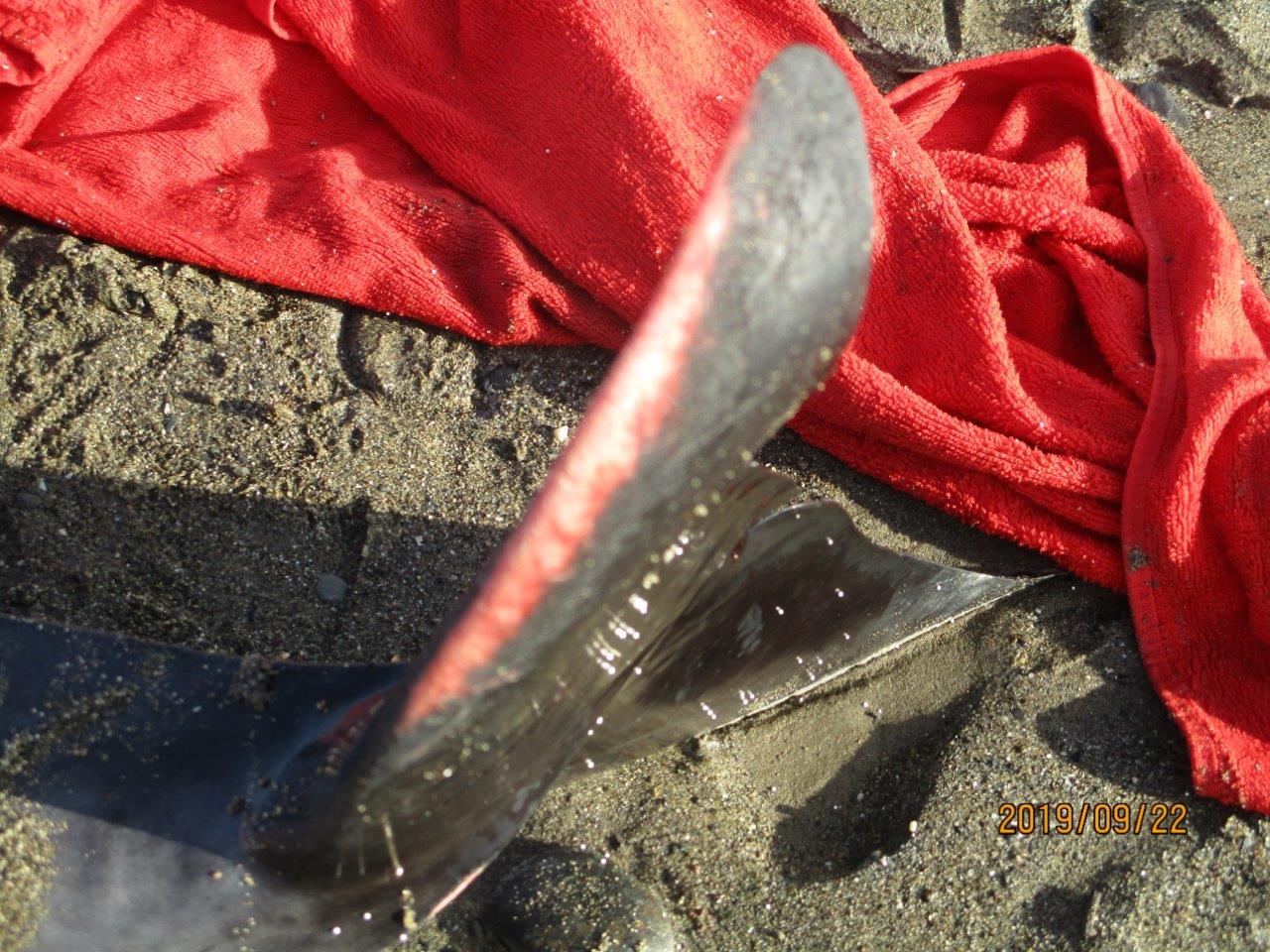 Our Association was advised by private citizens that a Minke whale was beached on the Castiglione beach (San Pedro Alcantara – Marbella).

All the CREAM veterinary team and other units from the Ministry of the Environment headed there at once. The whale had beached at low tide which made the stranding complicated. With a huge human effort the teams kept the animal alive, wetting it continually by pouring sea water on it. The rescuers refloated it at high tide.

We calculate that it measured about 14m and weighed between 30 and 40 tons. UNUSUAL STRANDING OF A SEA TURTLE

This sea turtle – a member of the (Dermochelys coriacea family) – was beached on our coastline. It was in very poor physical condition.

This is the largest of the sea turtles. Its straight carapace can be more than 2m in length and it can weigh over 500kg.

It has 7 longitudinal ridges on its back and another 5 on the belly.

It could be from Venezuela.

A TRAGIC AND CRUEL EVENT This should never happen again. All living beings have the right to exist and subsist. Luckily we can testify that the mentality concerning the sea has changed a lot in recent years. Fishermen are now directly involved and help set dolphins or sea turtles that have been caught in their fishing nets free; and they raise the alarm when they spot a marine animal injured or in dangerous circumstances.

Therefore we can congratulate ourselves that respect is now afforded to sea life and hope that these violent acts are a thing of the past.