March 12, 2021
European Thematic Centre of the University of Malaga (ETC-UMA)
Virtual meeting on defensive protection of the coast of the province of Malaga

Issues:
Sponsoring a Moratorium on further construction on the coast of the province of Malaga, so that the natural and semi-natural areas adjudged to be of high-worth still remaining can be identified and protected and / or restored before urban planning or infrastructure destroys them.

Goals:
a) – Identify a series of successful or potentially effective practices for the protection of the undeveloped stretches of coast of the province of Malaga, its adaptation to CC and / or ecological restoration.

b) – Promote synergies and networking of the organisations involved in coastal protection. 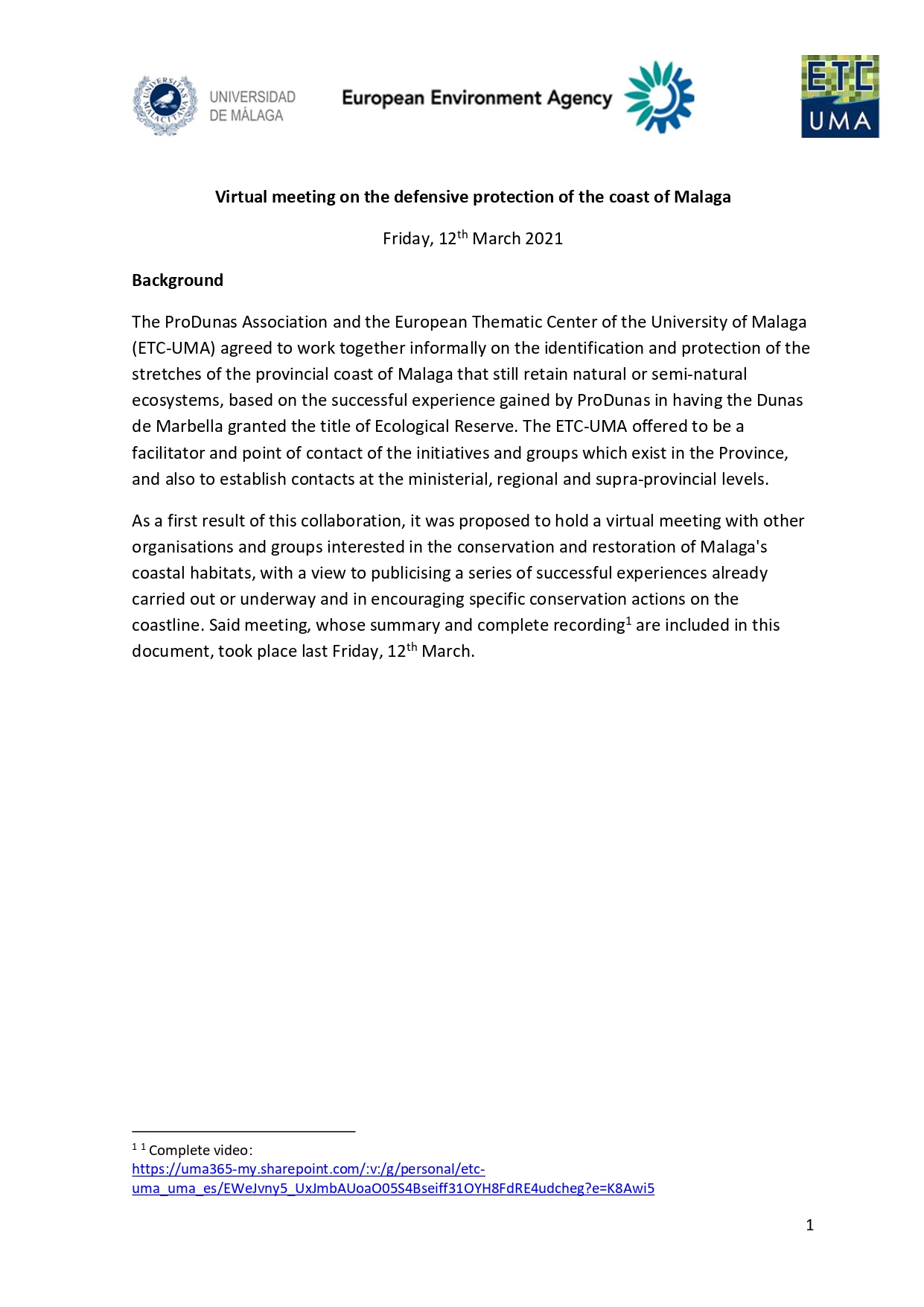 Summarising, ProDunas Marbella informs the attendees that in 2004 the ProDunas Association had the approval of all the Public Administrations. The Territorial Delegate of the Junta de Andalucía convened a joint meeting with the Head of the Demarcation of the Mediterranean-Andalusian Coasts, Malaga Development and Urban Planning. An essential requirement they set us was to engage with the owners of all the plots bordering on the sea (Dominio Público Marítimo Terrestre – DPMT) and have them transfer these to the State. Next, Demarcation of Coasts firmly defined the eastern boundaries of the Municipality of Marbella.

The work of a group must be strong in its conviction to protect the coastline and its natural heritage, and the Junta de Andalusia must express its firm support for this aim and provide a protection framework for it. In 2014, our Association sponsored a protection framework for all the dune ecosystems lying between Marbella and Cabopino, in the formula of the Marbella Dunes-Ecological Reserve.

Manuel Romero explained the basic idea behind the establishment of the Ecological Reserve on the coast of the province of Malaga. Ours is the only province in Andalusia to have the Ecological Reserve formula established. It is a formula that is foreseen in the 8/2003 Law of the Protection of Wild Flora and Fauna. In Article 32 it refers precisely to the fundamental objective of the conservation of biodiversity resources, as long as these are compatible with previously existing practices. The towns along the coast have a lot to say about their shared history of the coast, and obviously there is a series of established practices, of both economic and social importance which must be taken into account.

It was decided from the beginning to involve Marbella Town Hall with the ER-Dunas de Marbella with its approximately 22 hectares and the one just getting started in Manilva, ER-Playa de Manilva, with approximately 48 hectares. Getting the Towns motivated meant that both the political and urban departments should back the process. Then to handle the coastal issue, Demarcation of Coasts and the Territorial Delegation for the Environment in Malaga are in charge of the declaration. The Technical Plan is established by the Law and has been adopted by the Town Hall and the Territorial Delegation. This establishes the managment strategy for organising the areas involved.

There are parallels with the Plan for the Use and Management of Protected Natural Spaces which goes much deeper than this, but Malaga has taken on board the management and planning of the Ecological Reserve areas based on it, and each of agencies was assigned the appropriate investment management.

What is the current situation? In relation to Marbella, which is our main area of concern, investments have been made by the Town Hall. Although the dunes in Marbella are broken up different areas, the five habitats of Community Interest are very valuable – there are 83 species of vertebrates and a large number of very interesting plant species, such as the Sabina. Manilva is lucky that its dunes are in an unbroken.

There are basically two problems: On the one hand there is coastal erosion and on the other there is the damage caused by humans: building, dumping of rubble, expansion of alien invasive plant species and the trampling resulting from visitors walking all over these very ecologically sensitive areas.

What has been achieved? The Town Hall takes on the obligation of making a series of investments in the area of conservation: control of visitors, stopping the trampling on the dunes, creating new car parks and, by means of signs, highlight where the protected natural areas start and end.

To sum up, the Ecological Reserve has much to offer in coastal conservation, but only in those areas where this has been previously recognized – the entire coastline will not be declared an Ecological Reserve. The support of all the Administrations, local, regional and national is essential.